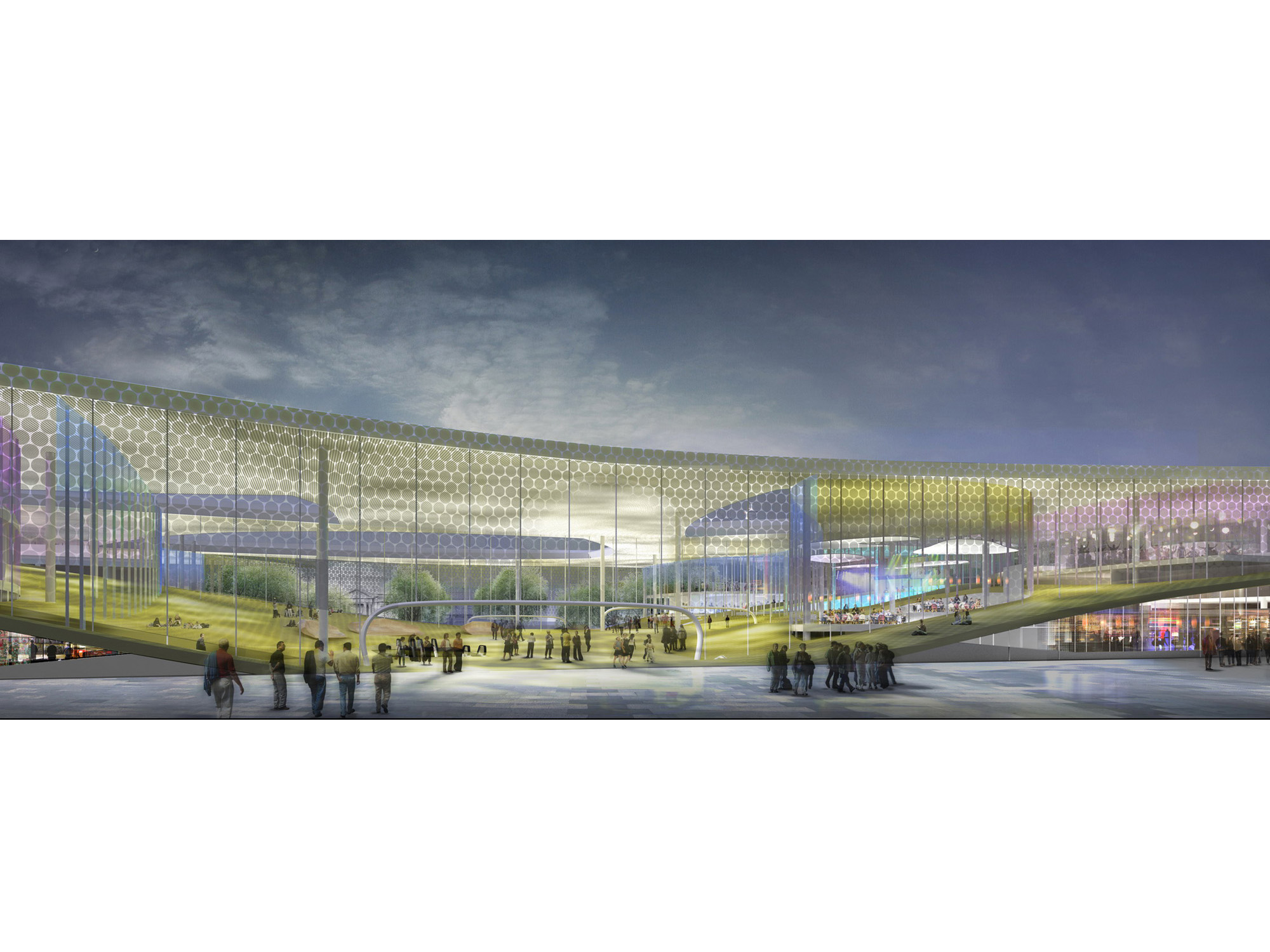 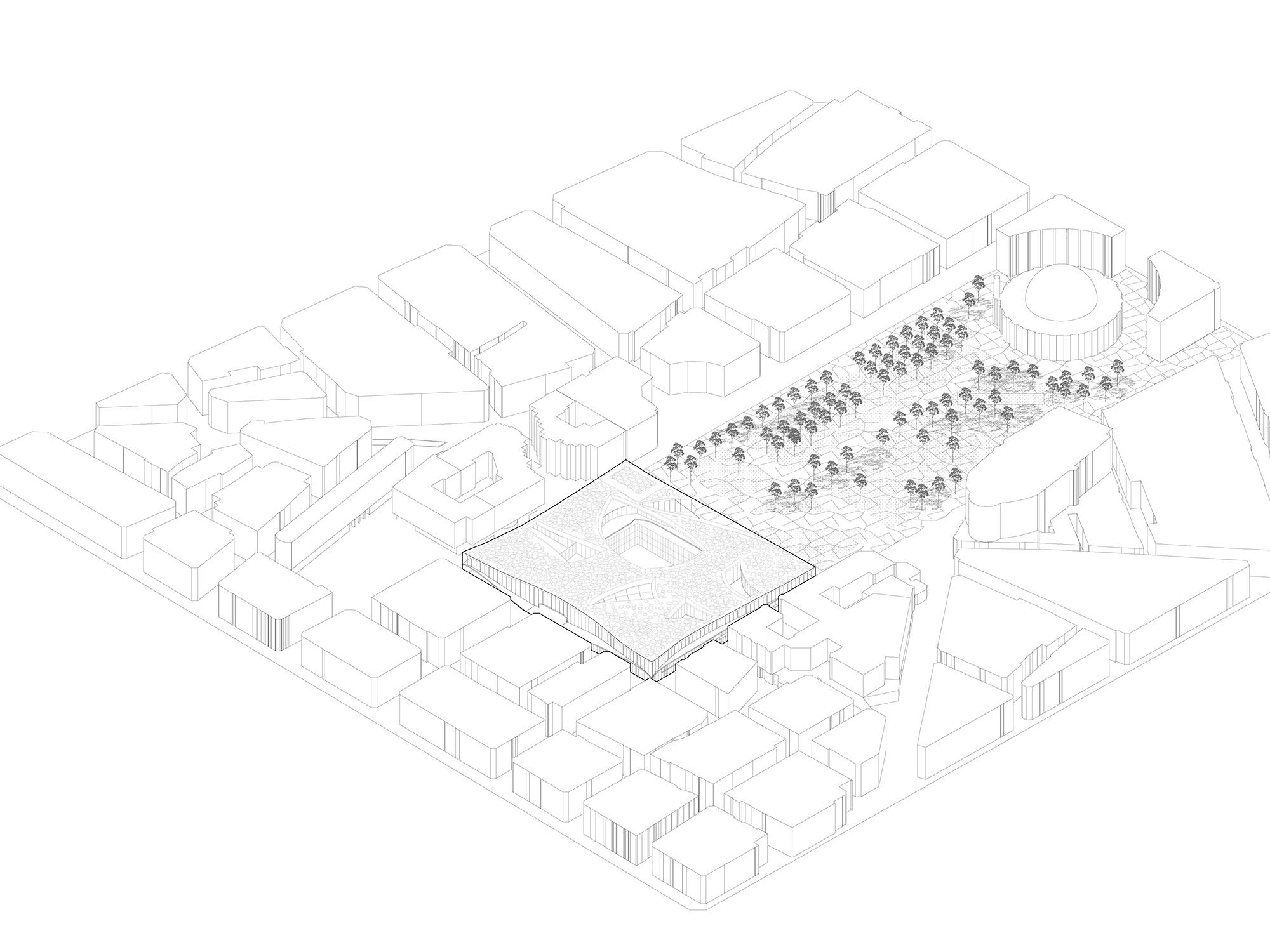 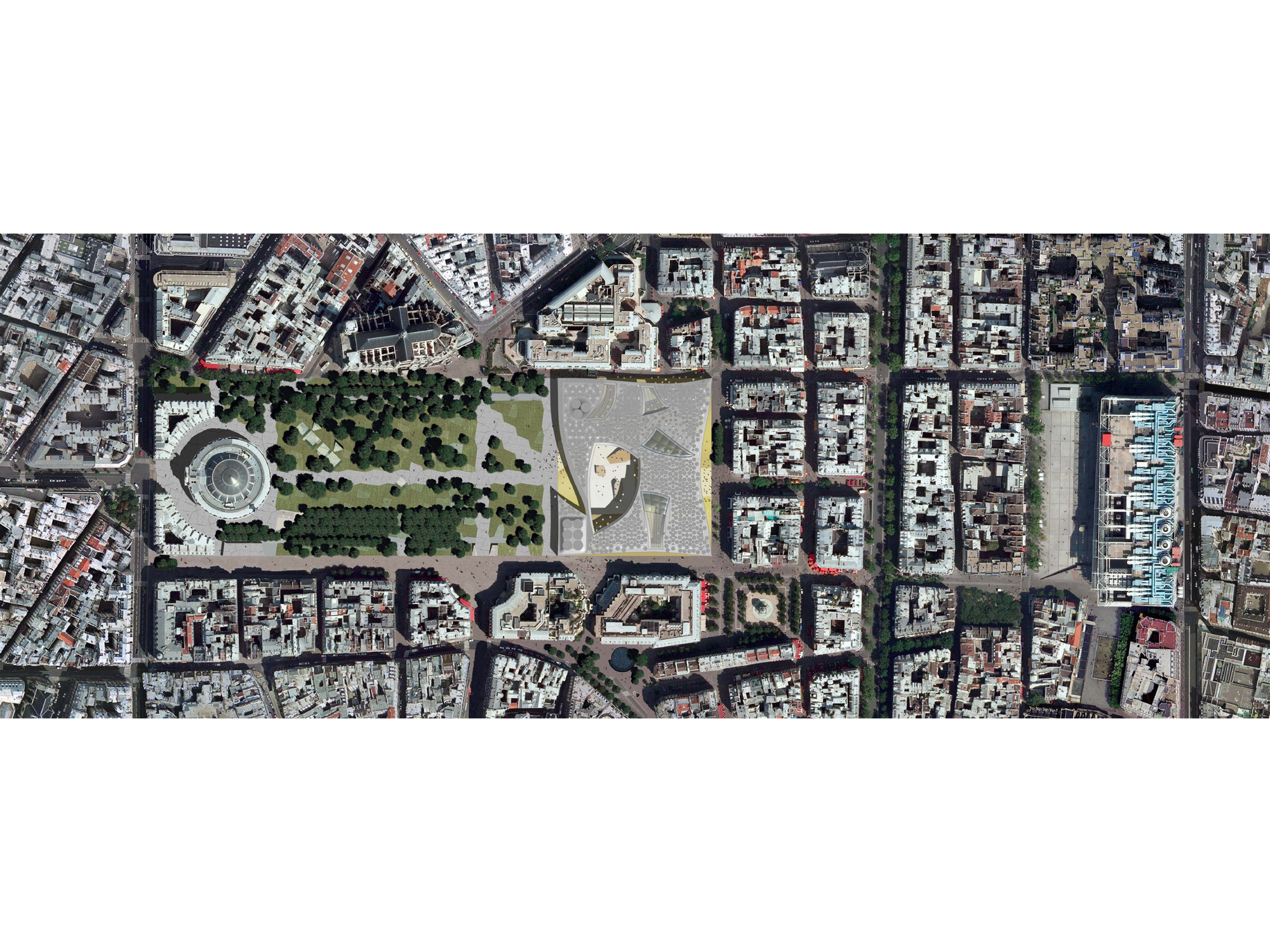 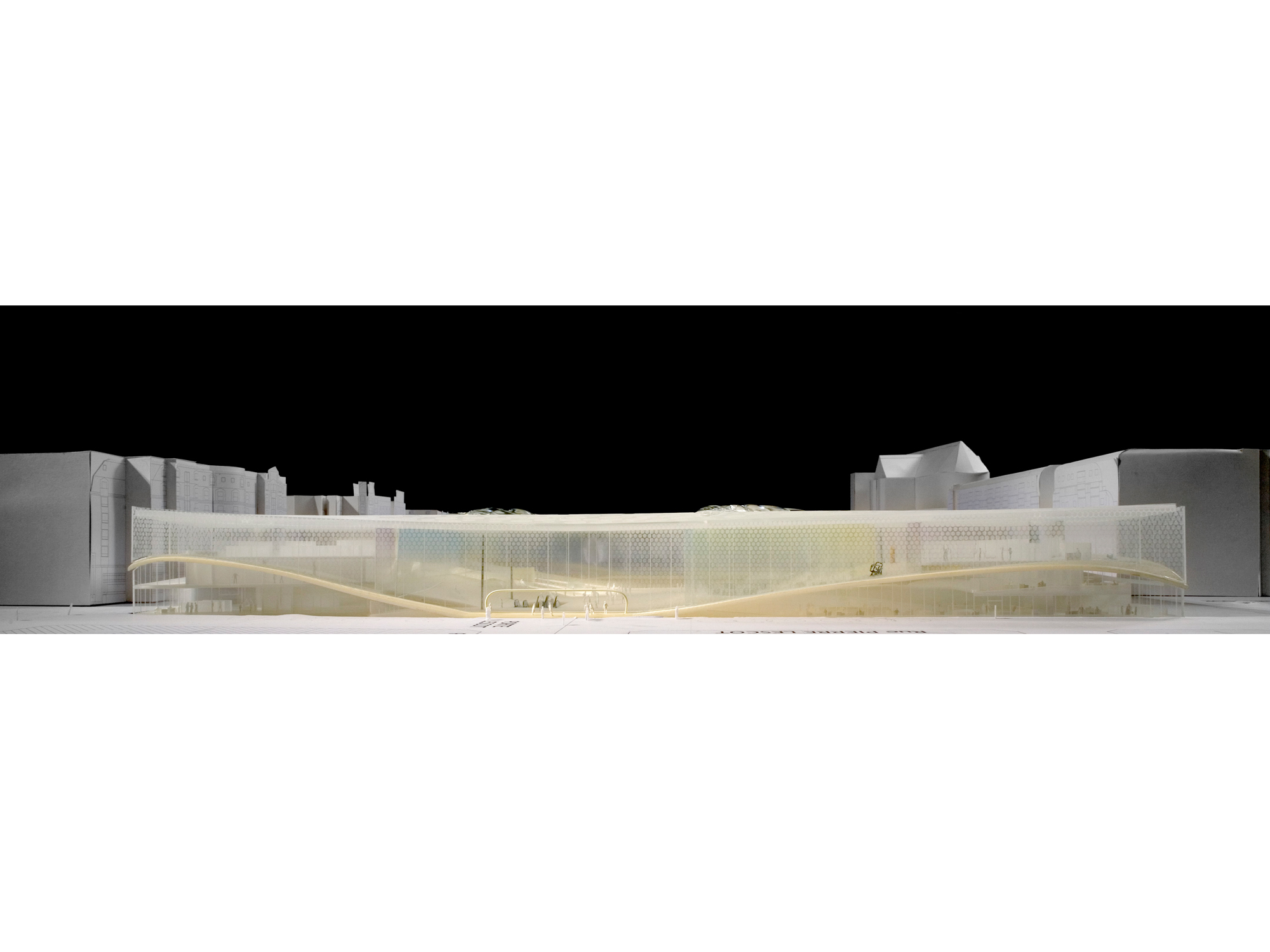 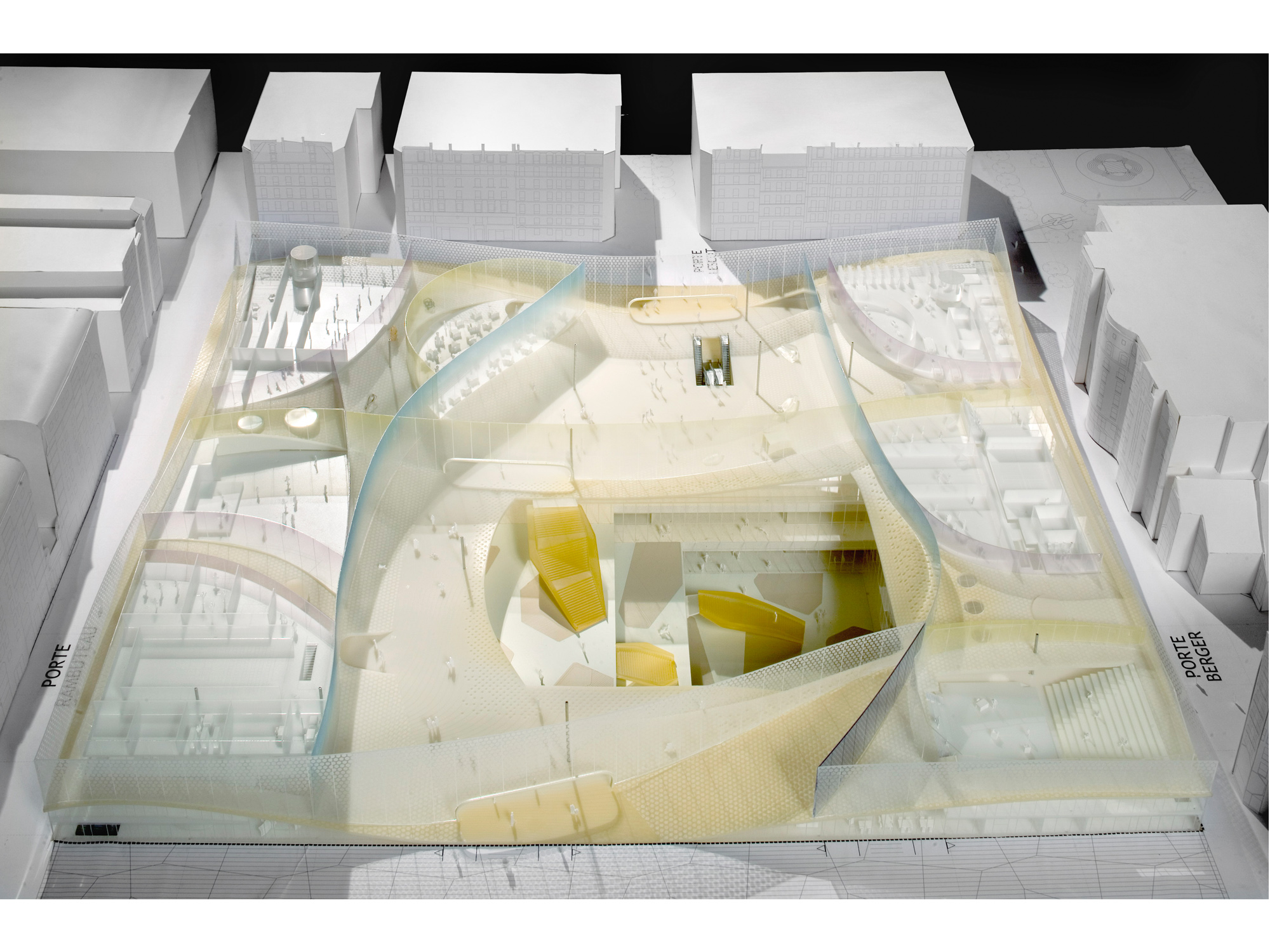 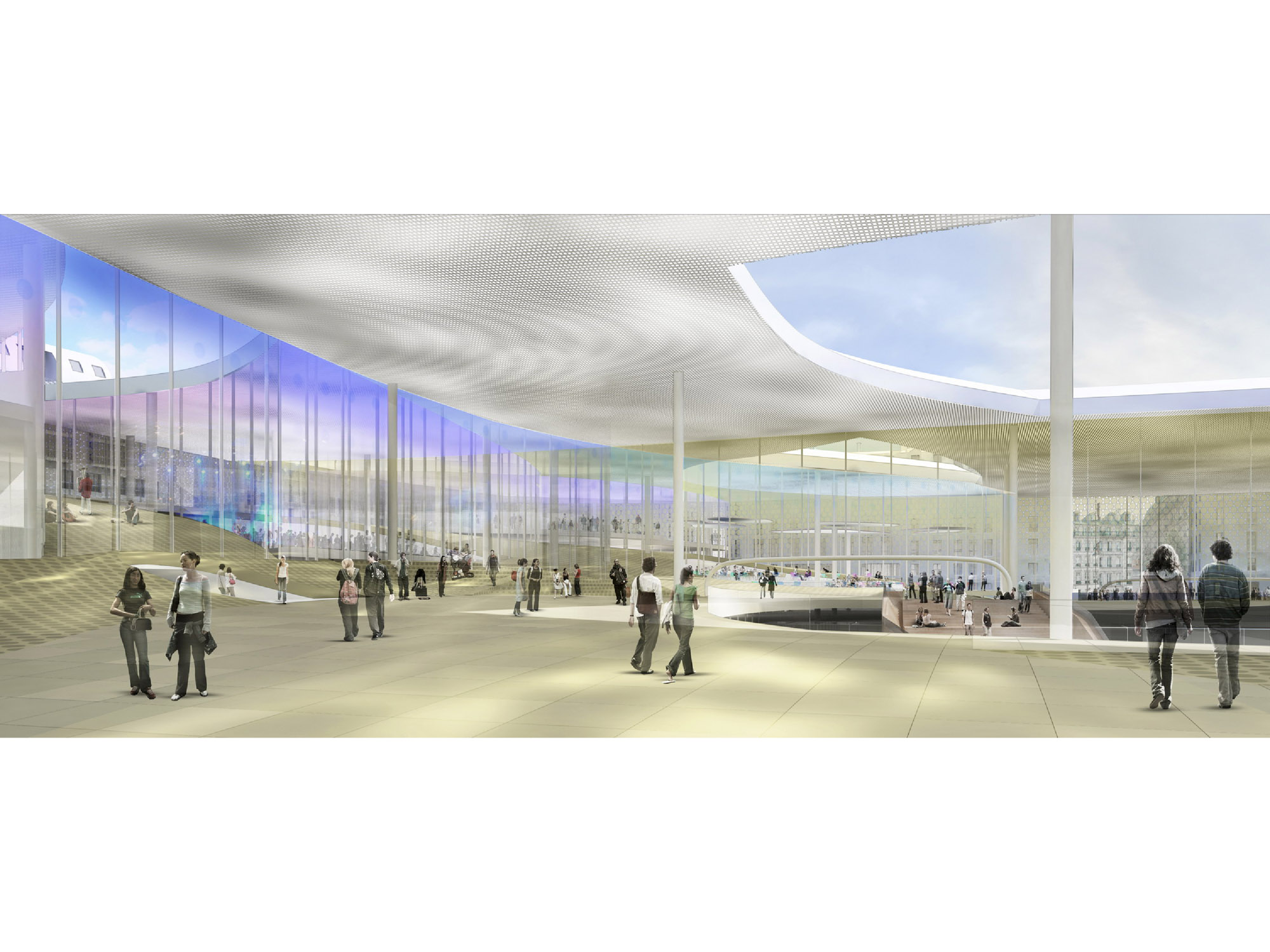 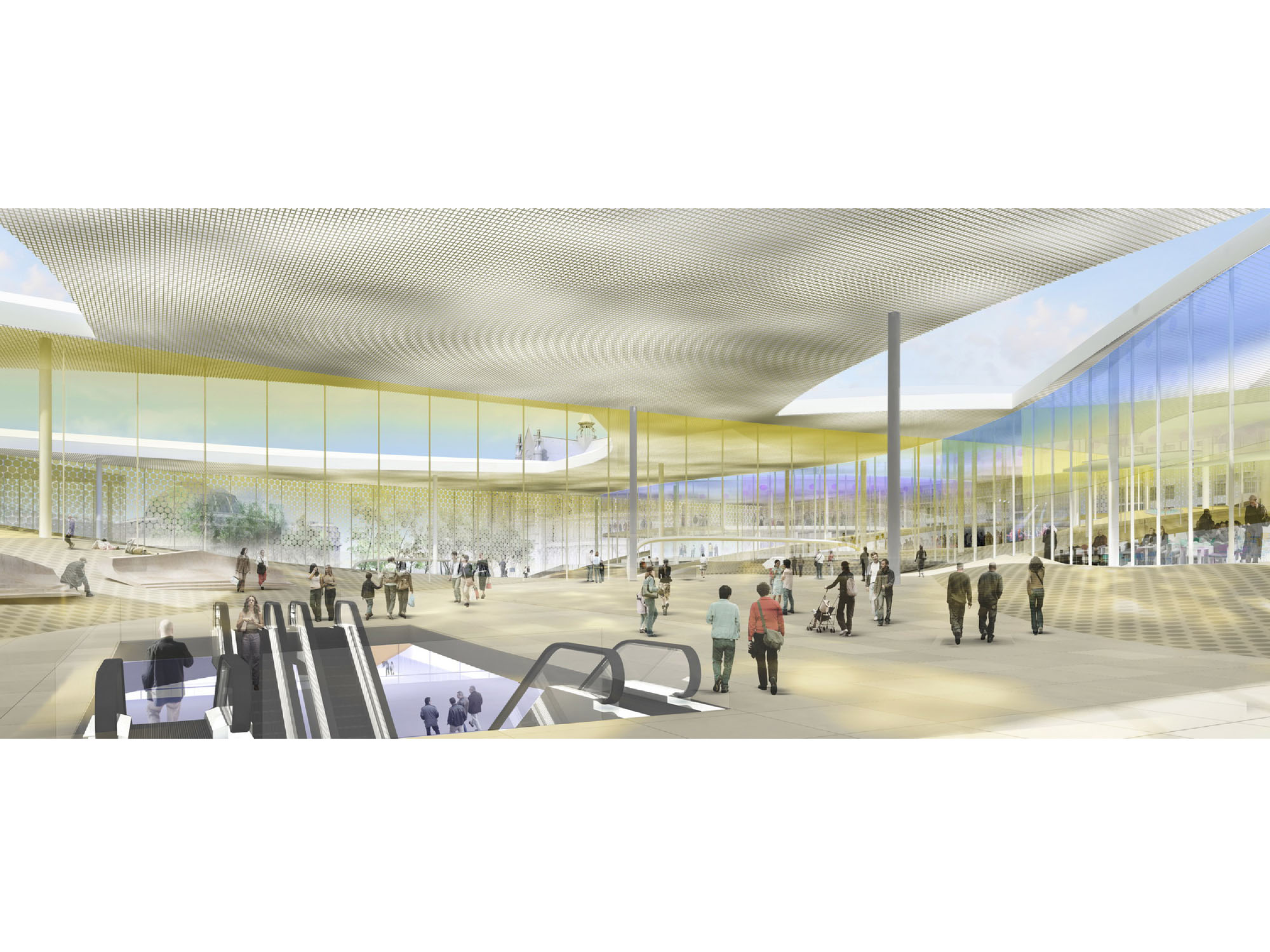 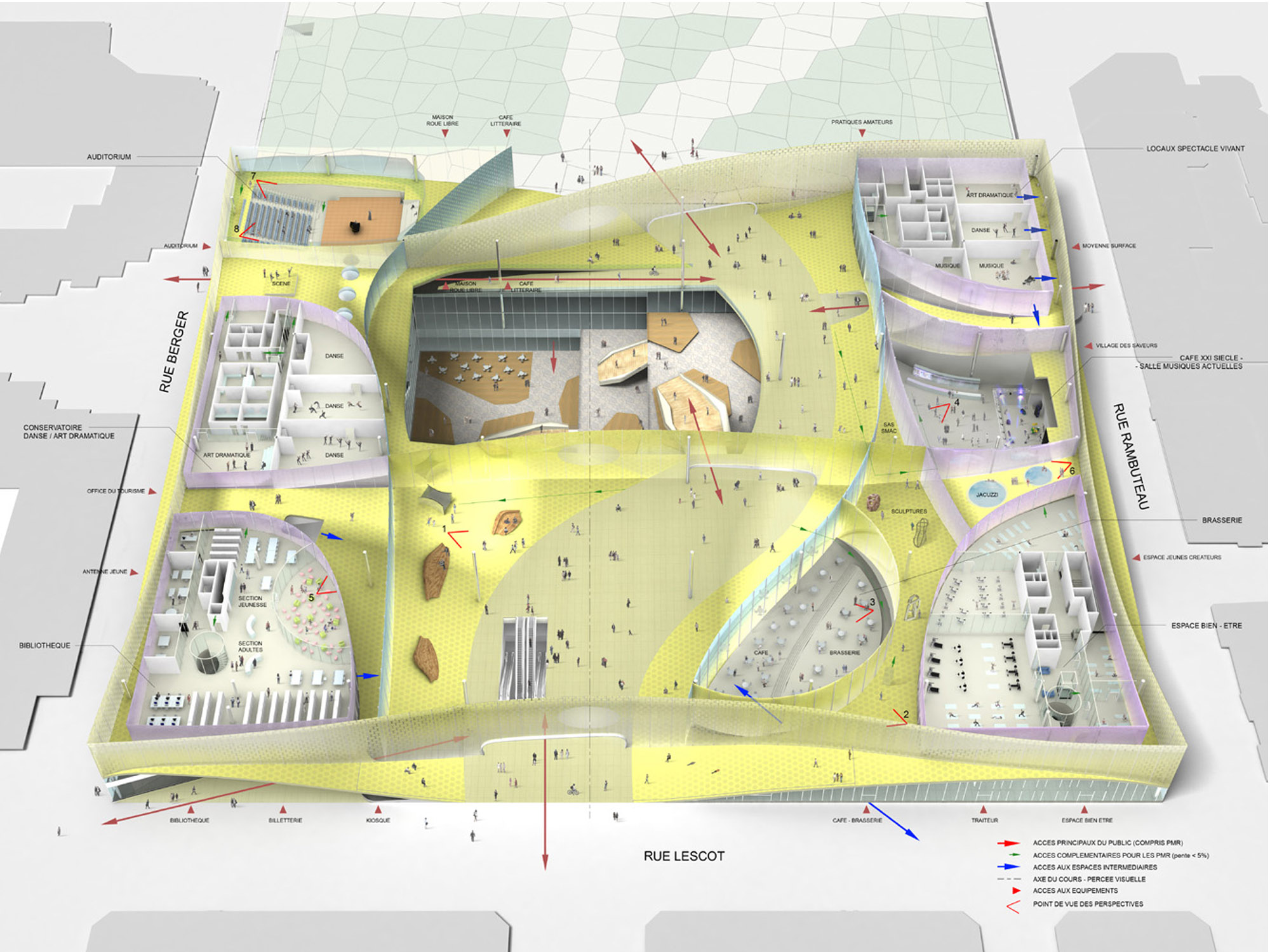 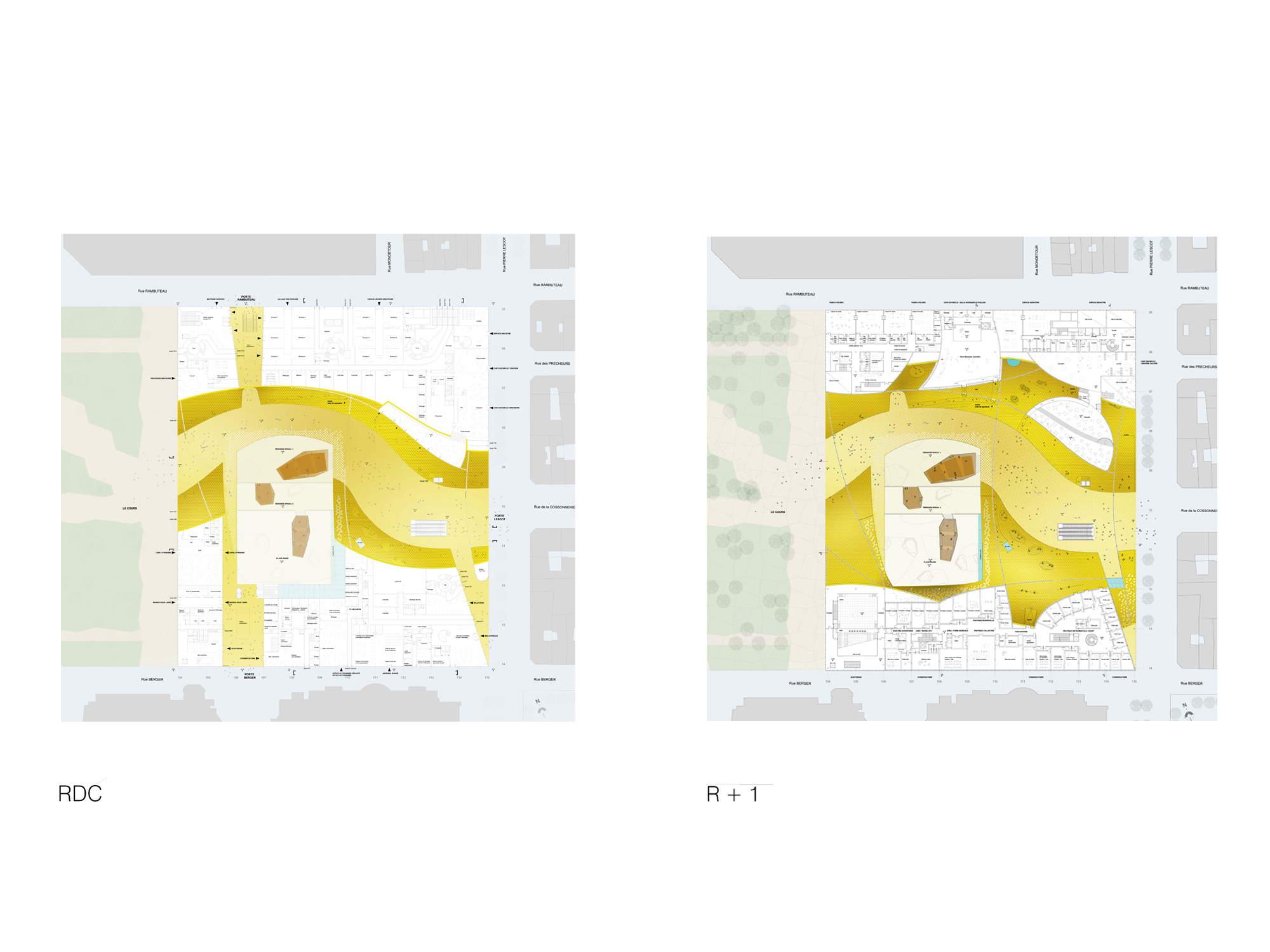 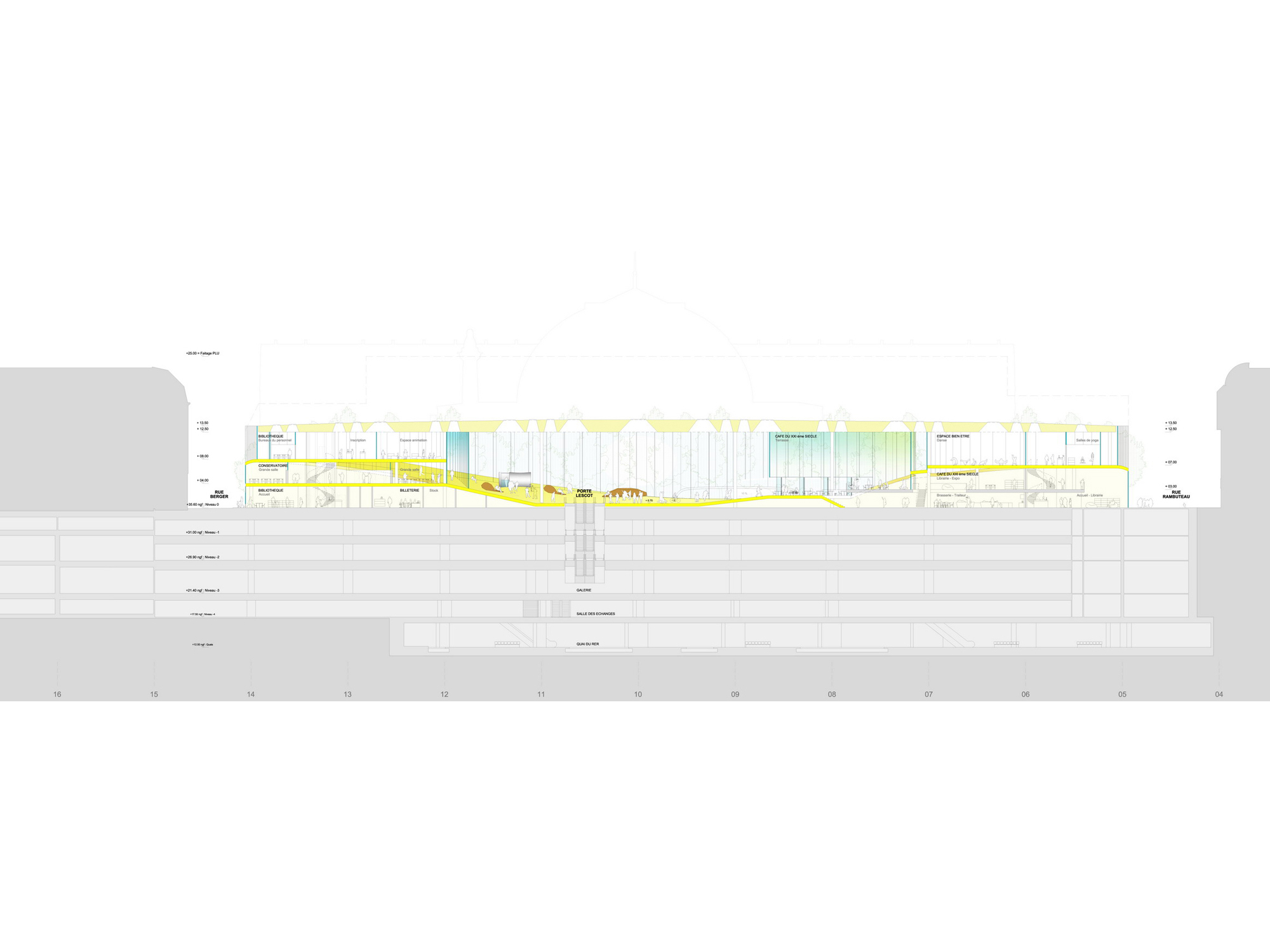 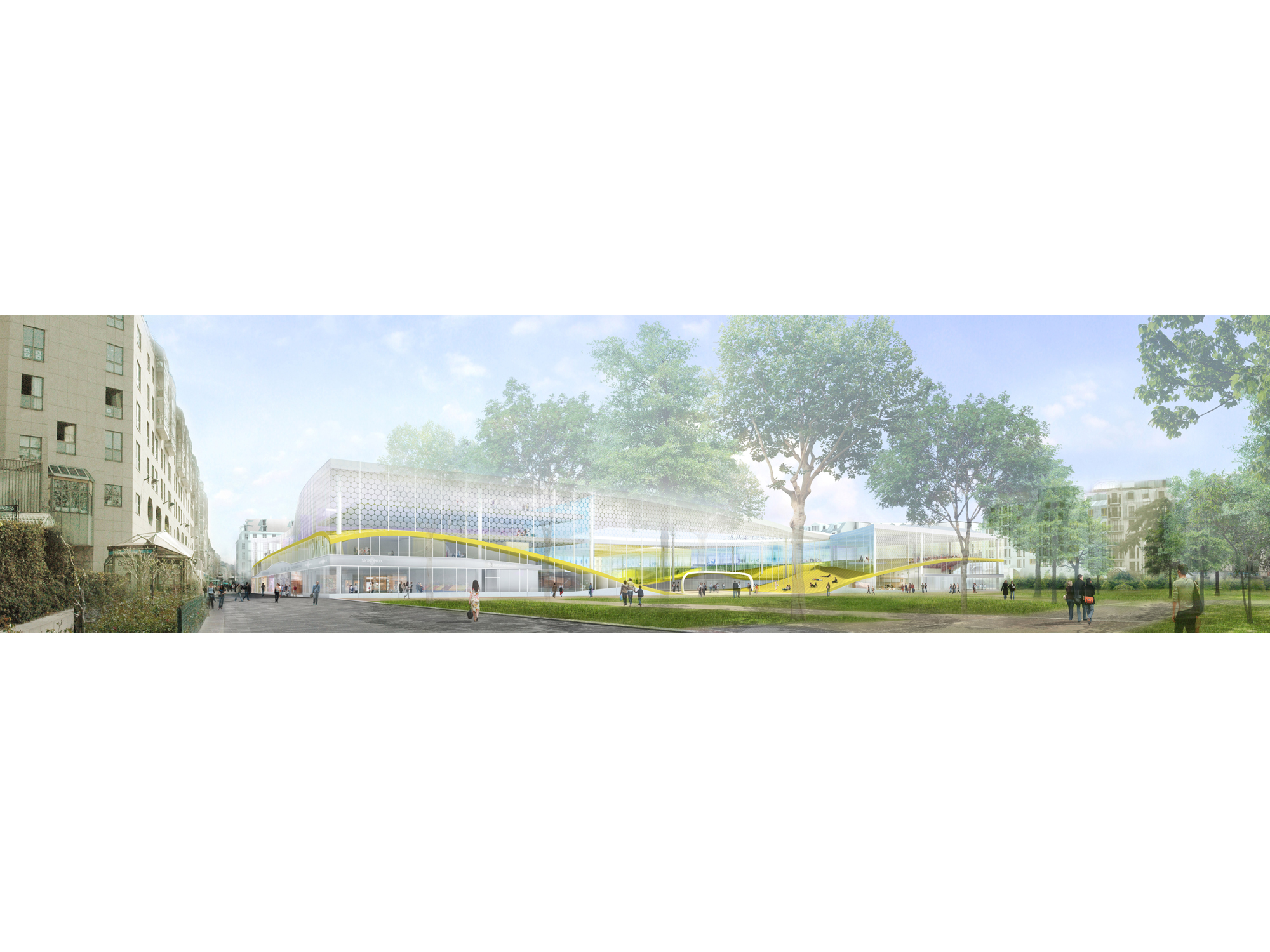 The "Carreau des Halles" is a complex object. The buried part of it includes, on five sub-basement levels, a major train station served by nine lines running throughout the “Ile de France” region, and a huge and highly frequented shopping mall. On the ground, the site, which runs 150m along each side, is encumbered by many technical constructions that stand out and its center is occupied by a patio, which lights up the shopping mall.
The City of Paris wanted to reshape the whole thing and set up a superstructure of programs aimed at breathing life into the neighborhood (with a music academy, library, concert hall, cafes and retail spaces).

At this popular place many train-lines which criss-cross the region form a major transport hub. It is a place where one experiences the metropolitan dimension of the capital city, while in its very center. What a capital city is supposed to offer is : a wide variety of opportunities and activities, the bustle of the crowd and idea of novelty. In these ways our "Carreau des Halles" project is a metropolitan urban opus.

Since the place upon which the project sits was so obstructed, we substituted it with a brand new floor which covers the many existing obstacles with one continuous surface. Its curved geometry unifies the site and restores the original shape of the square (the “carreau”) to its larger dimensions (150m x 150m). This new floor is connected at multiple points to both the streets around and the sub-basement levels of the city.

To the crowds which pour out of the congested underground levels, this surface offers up a strong contrast. It is a vast communal space, a genuine metropolitan experience which is animated by numerous activities and opens to the city.

Architecturally this curved ground constitutes a homogeneous and continuous environment : the floor surface and the glazed partition walls of the various programs stem from the same geometric principle. A landscape is formed that is ever-changing because of the combination of the different curves, of their materiality and colors. The curved floor is covered and while one is sheltered, one remains in contact with the urban panorama. The covering is pierced by numerous glass roofs, two of which are mobile and can slide open. Through a special treatment, the ceiling absorbs the noise emanating from the public. The place is acoustically comfortable and at night will produce little nuisance to the neighbors.