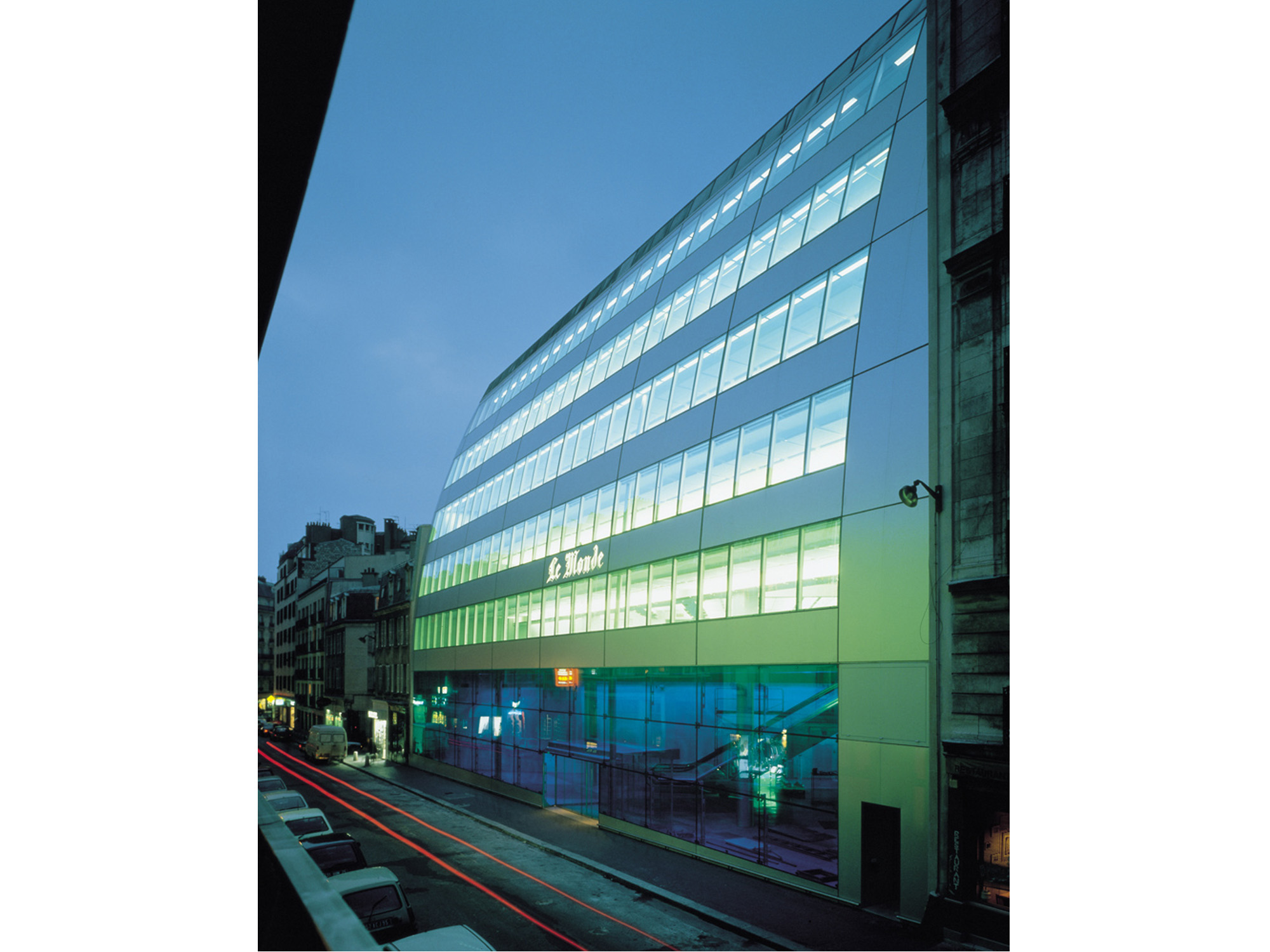 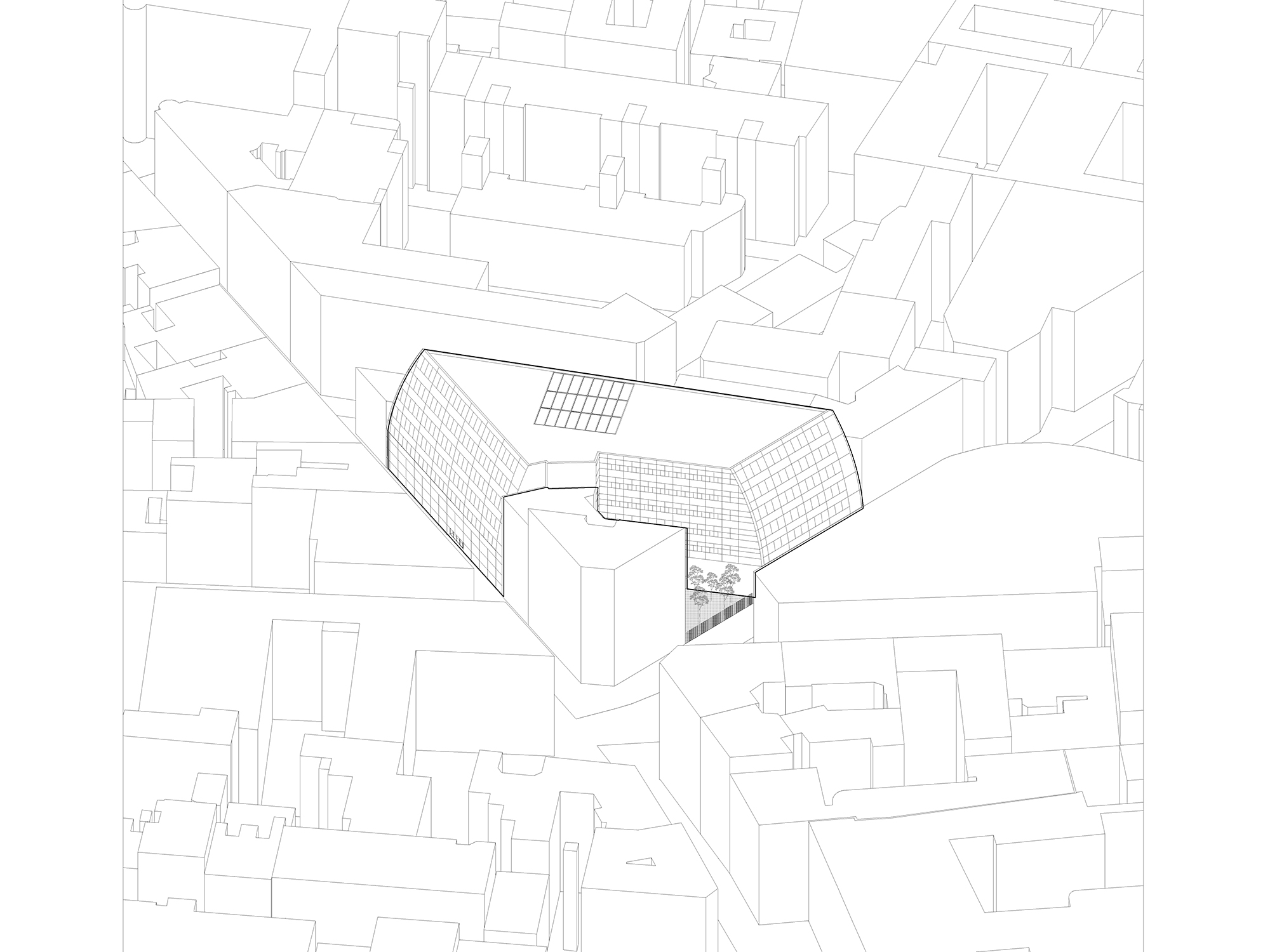 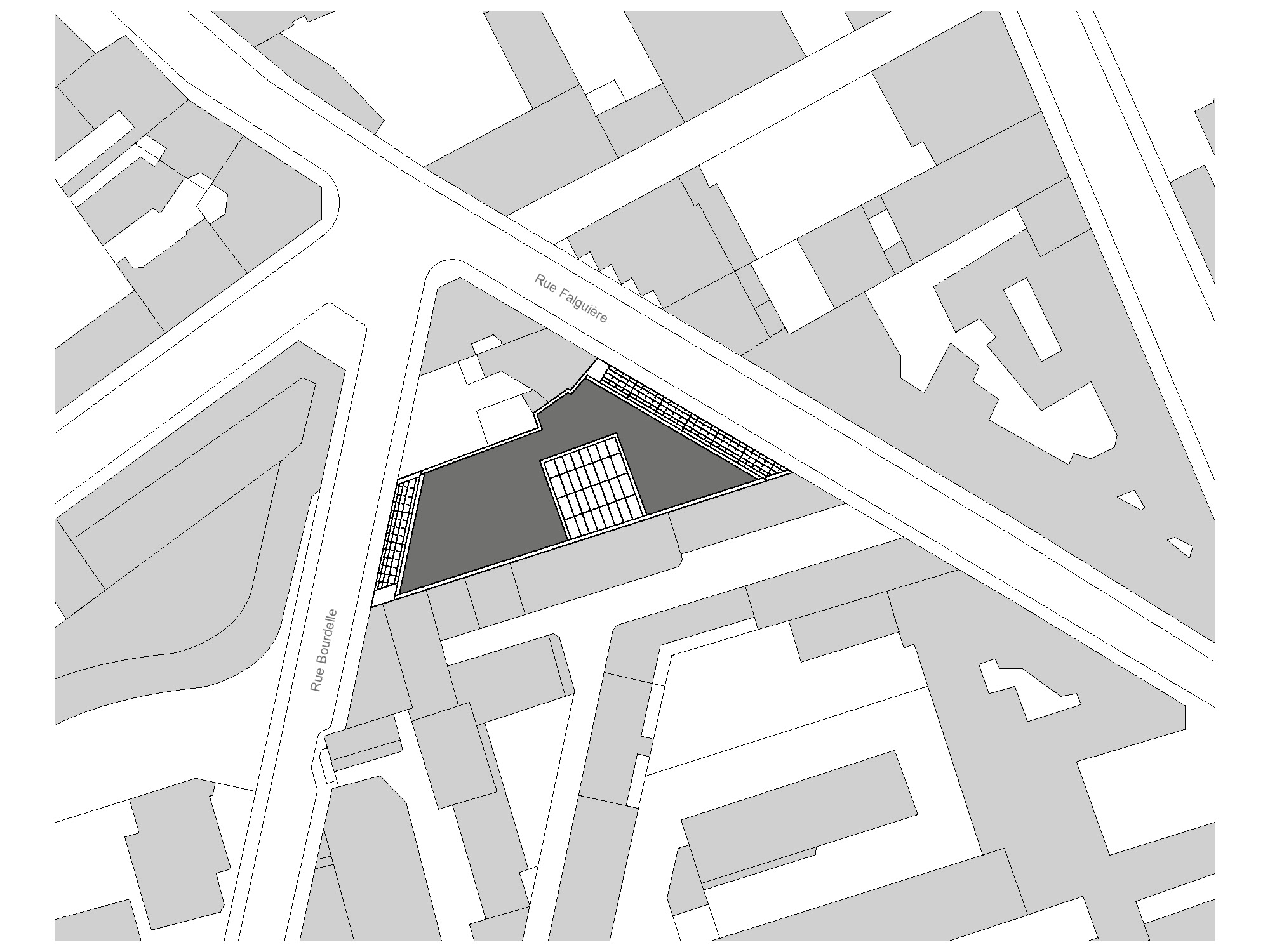 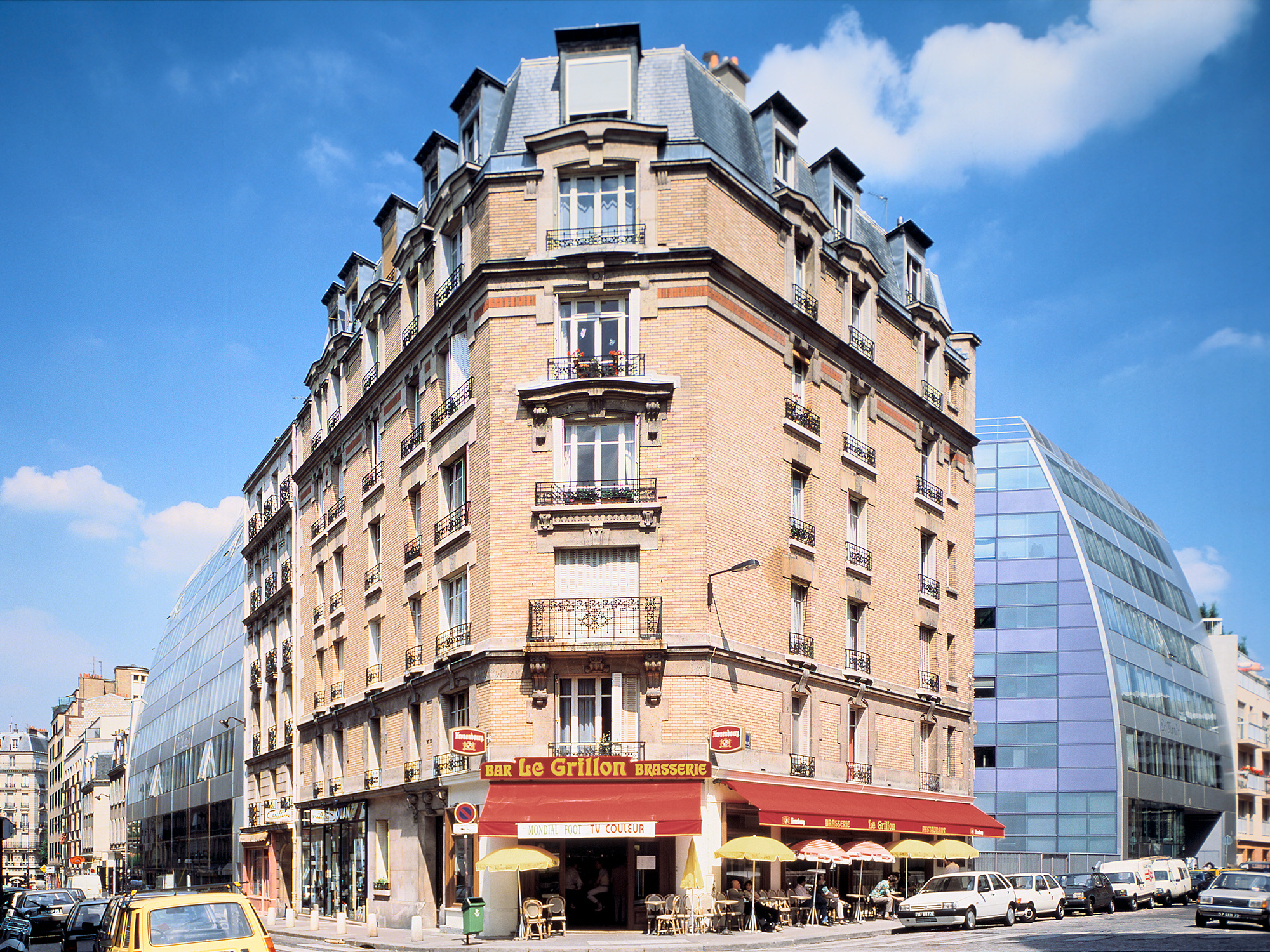 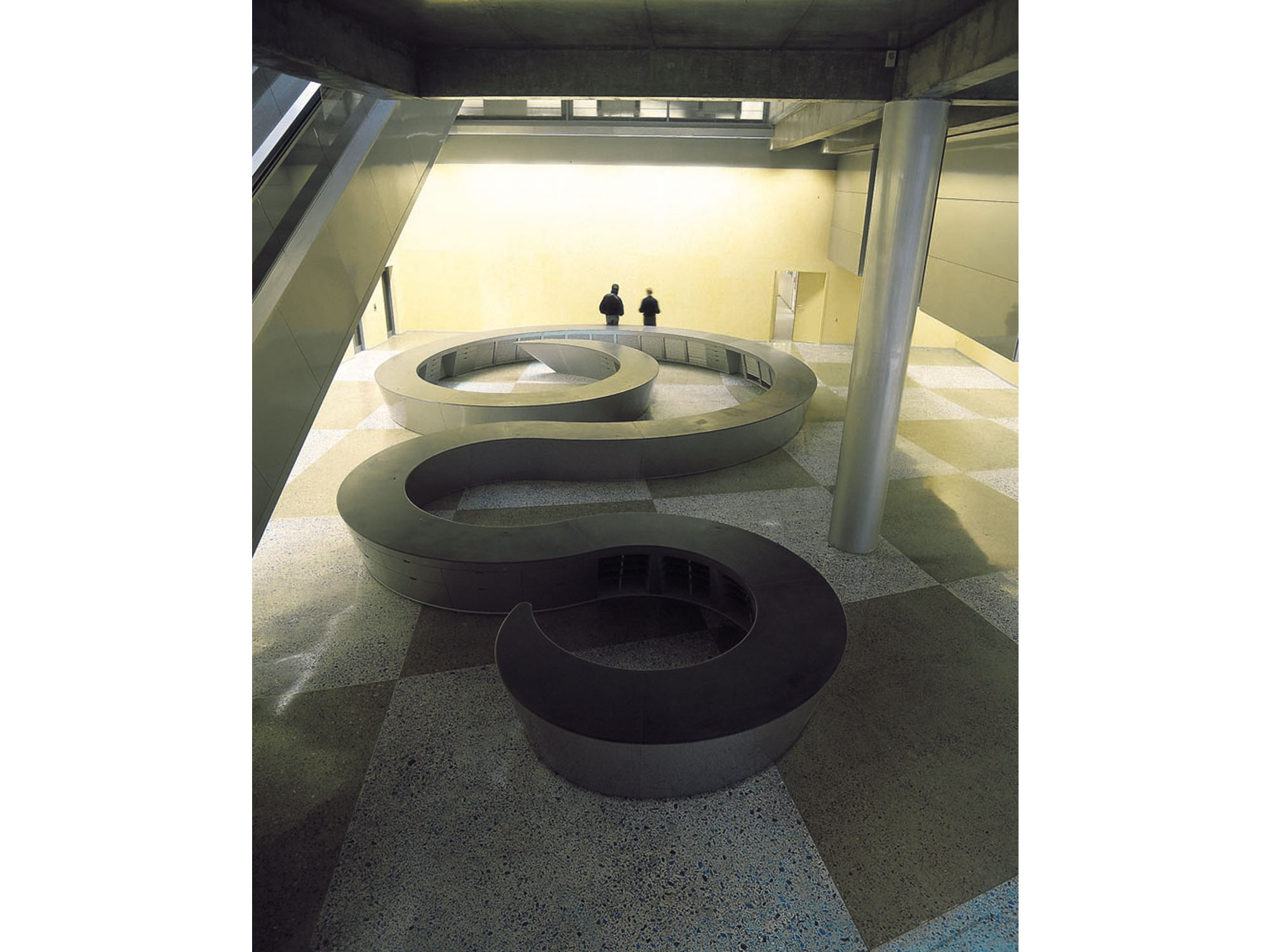 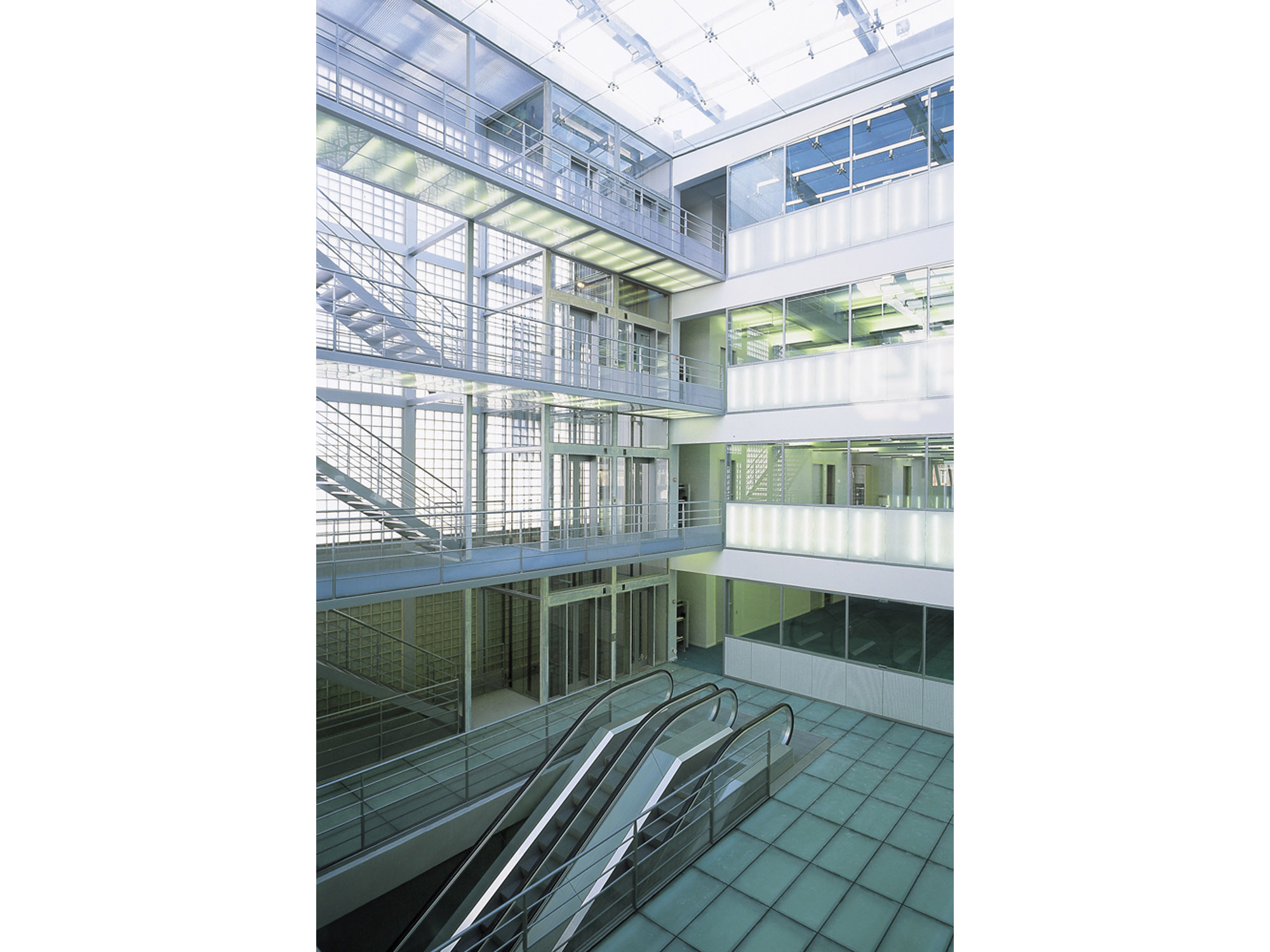 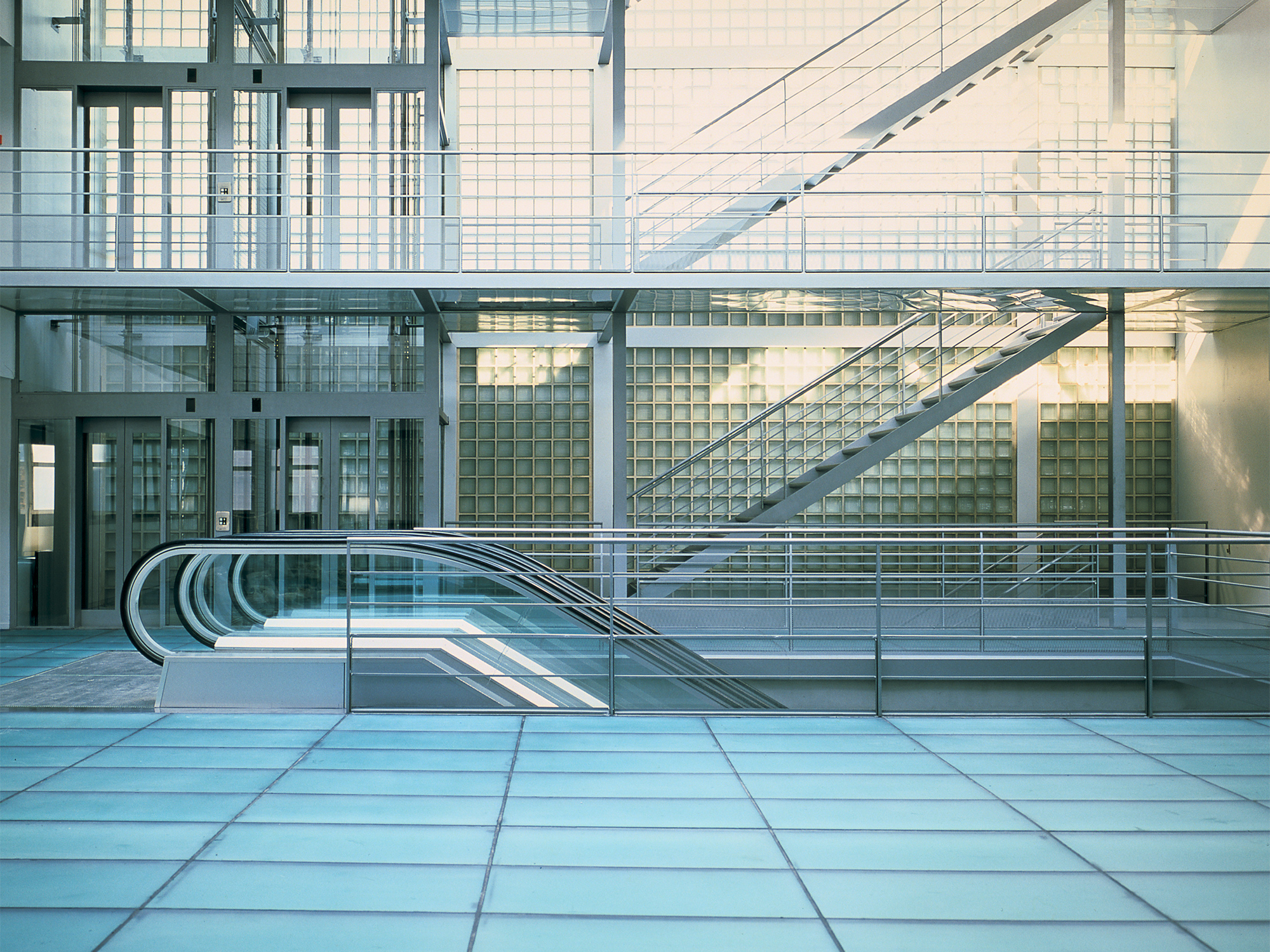 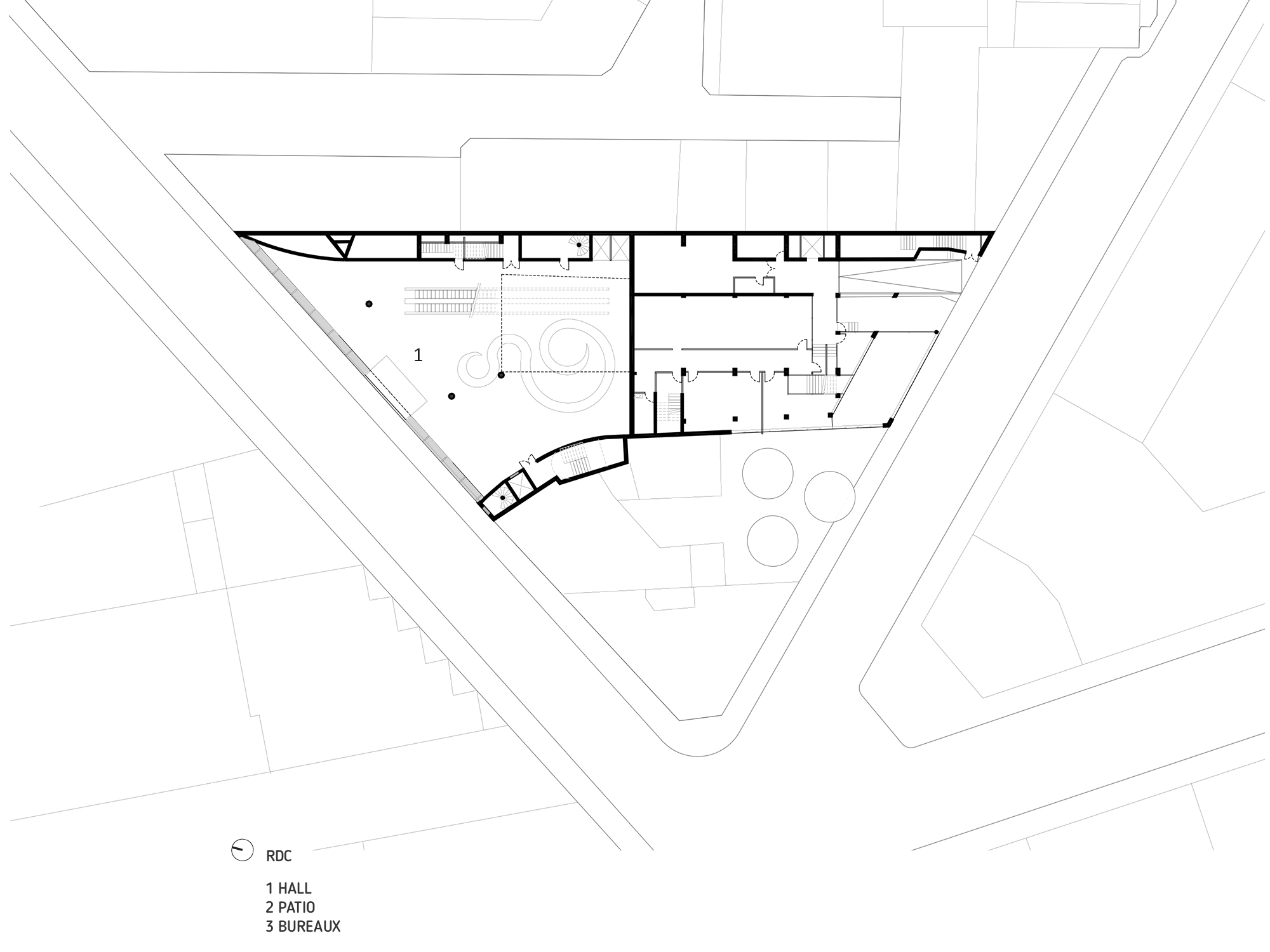 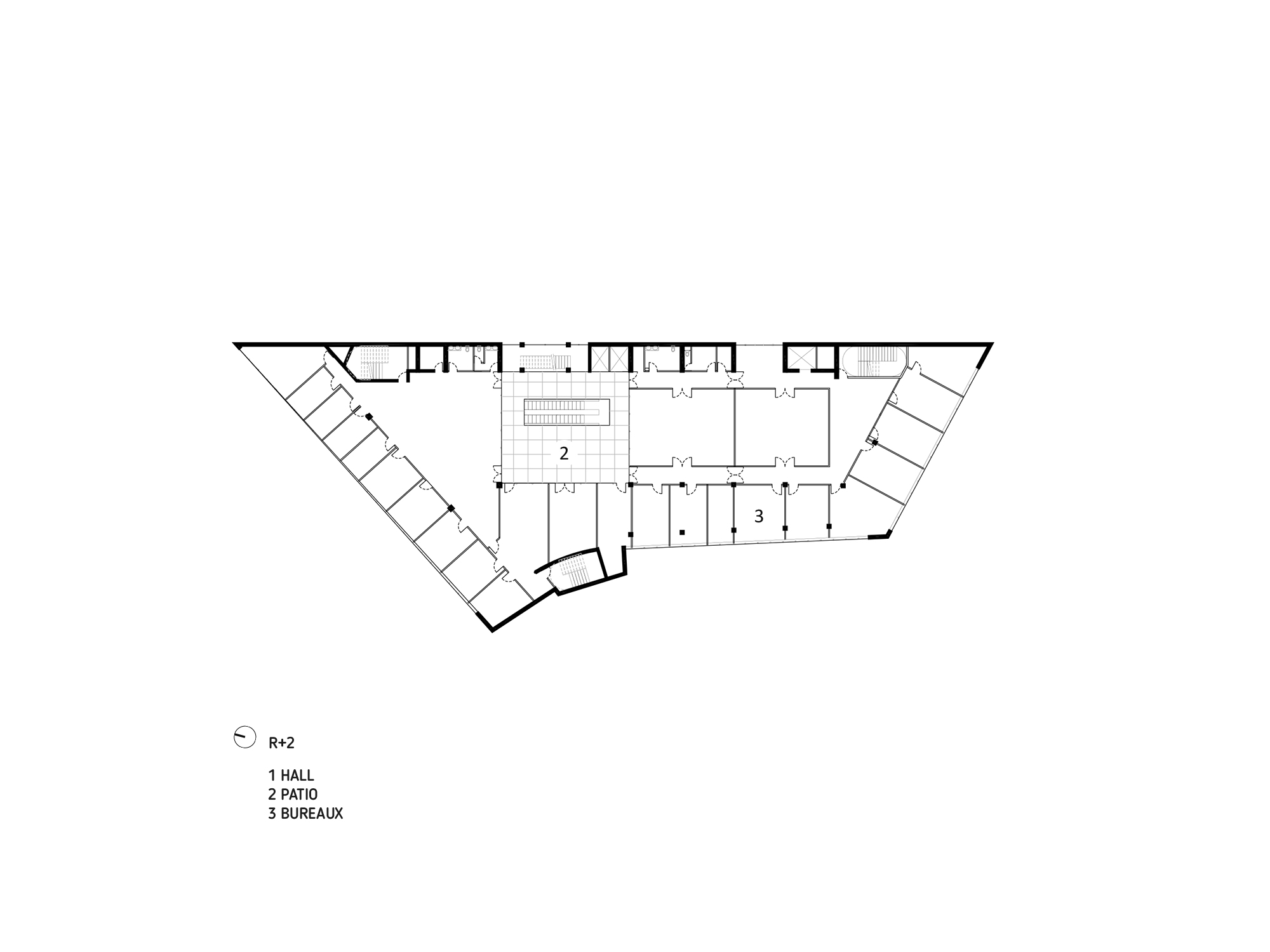 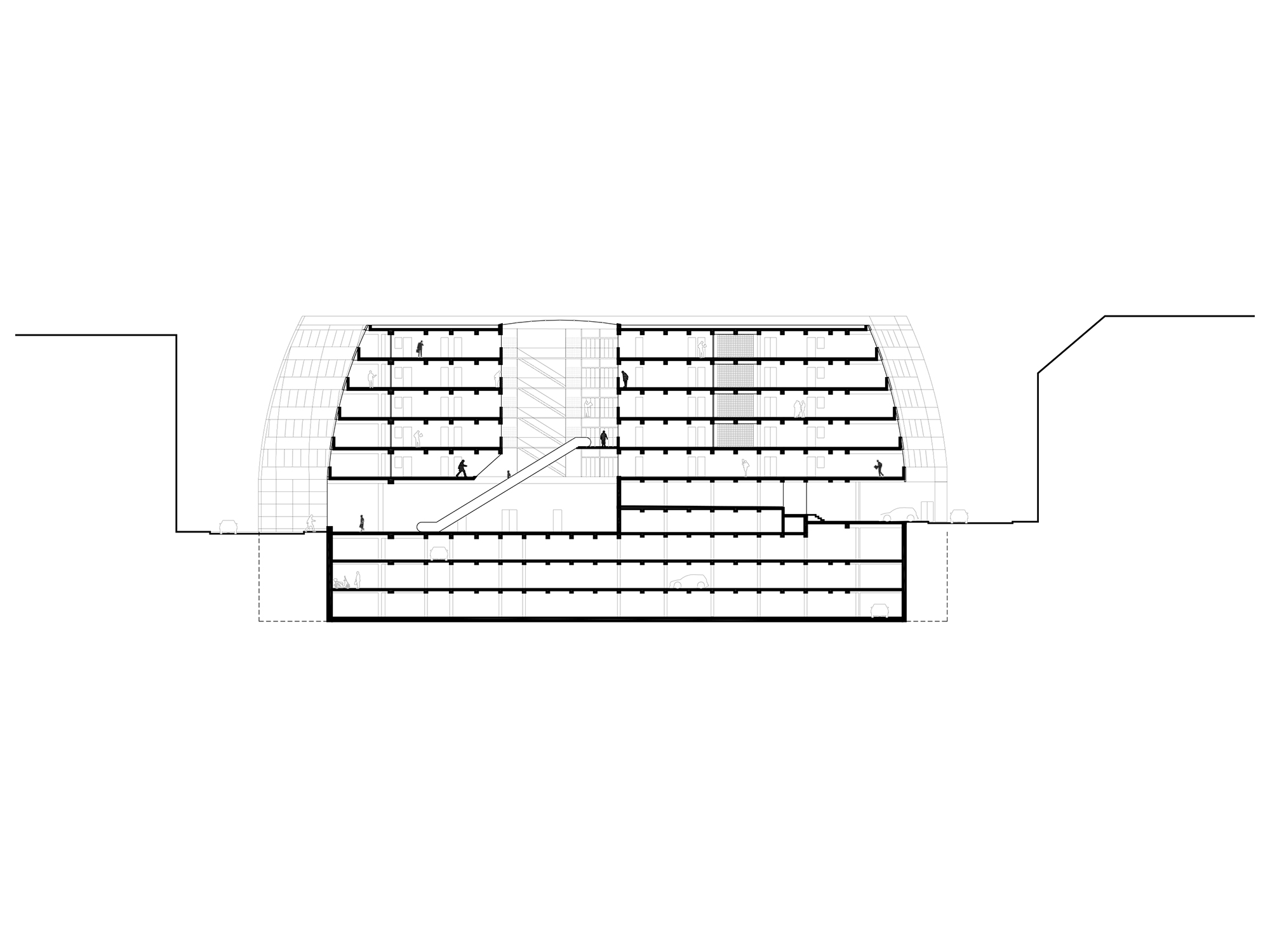 In 1990, the Le Monde newspaper set up its headquarters at rue Falguière on a plot linking two narrow streets in the 15th arrondissement of Paris. The newspaper known as "the Boulevard des Italiens daily", whose name was attached to prestigious Paris of Haussmann’s, wanted to mark a change of era by moving to a new building and organizing itself into landscaped offices. For the headquarters of Le Monde an architecture of its own size needed to be tailored, capable of overcoming the narrow streets without appearing ostentatious.

The architecture of the building, following the spirit of the newspaper, wanted to express two ideas. On one hand, Le Monde is an institution, on the other, in its appearance, the newspaper is more preoccupied by content than by form. The geometry of the facades and the treatment of light communicate these ideas.

The foot and the crown of the building are linked with a single curve. This curve fits precisely into the template required by the urban stipulations stating that a vertical part of the facade has to be topped by a setback. The curve spares the façade of “Le Monde” being broken in two parts. From the narrow street, the building appears in its whole height and compared to its neighbors, it distinguishes itself by its sheer stature. Moreover, the curves of the two facades on the two streets correspond with each other and form a whole that signals the importance of the edifice. The building plays with the conventions of modern architecture - glass and steel, shooting lines, lack of moldings, neutrality - but the curves twist this commonplace. As for “Le Monde” who intends to be both classical - it is after all a reference newspaper - and insubordinate.

The role of content is also played by the light. At night, the hall on rue Falguière fills with a blue glow. During the day, the light is reflected by the glass microbead texture of the lobby walls, and the glass pieces inserted in the floor. Three metallic objects seem to float in this space, a serpentine counter, an escalator and six volumes, hanging from the ceiling, that contain “Le Monde” documentation.

The escalator leads to the central patio. It is a suspended cubic volume set at the crossroads of the five newsroom plateaux. Its six glazed sides are luminous : the upper part is a glass roof, the walls are transparent partitions and the floor is made of blocks of unpolished glass which allows the light through to reach the hall.