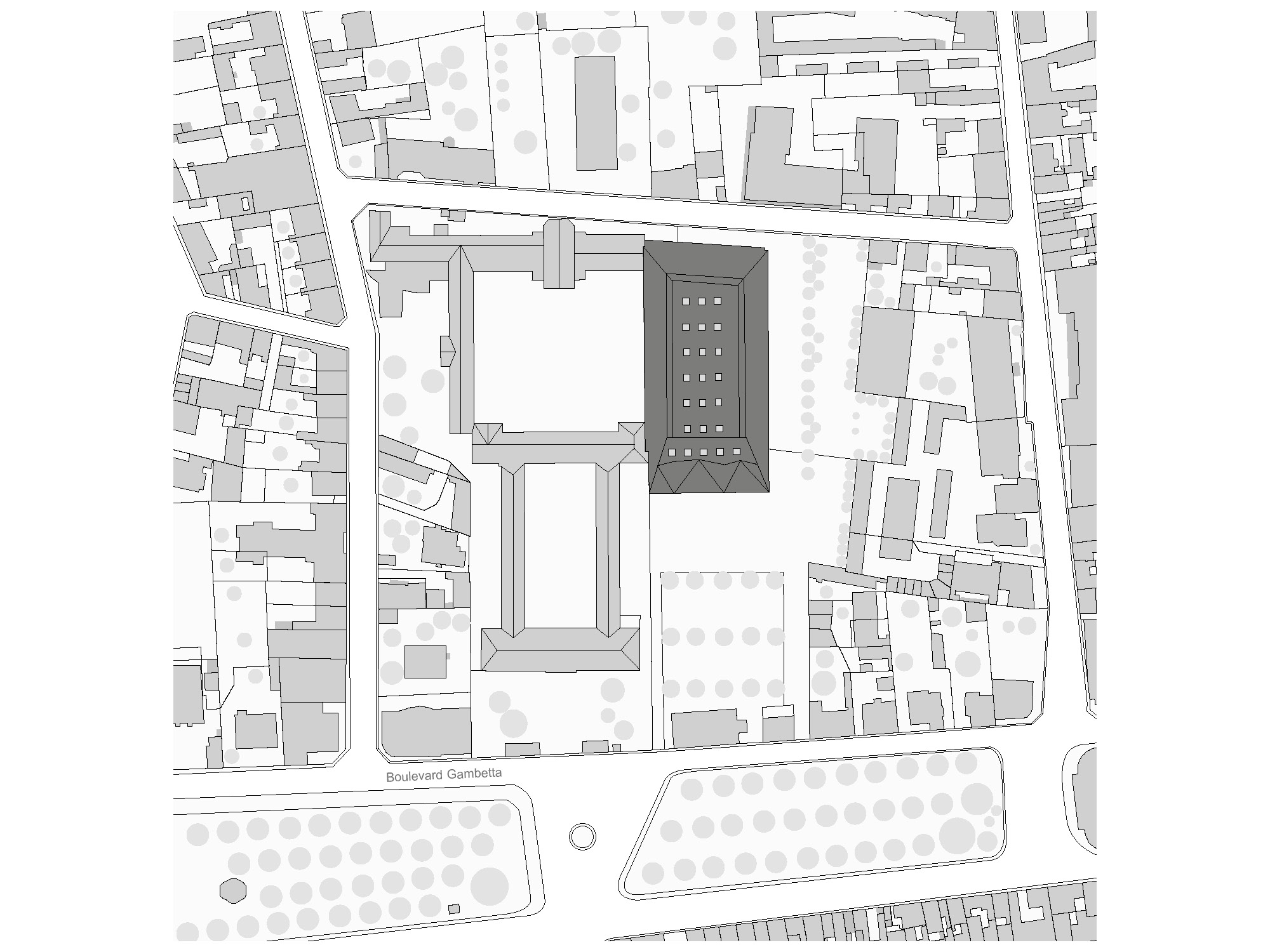 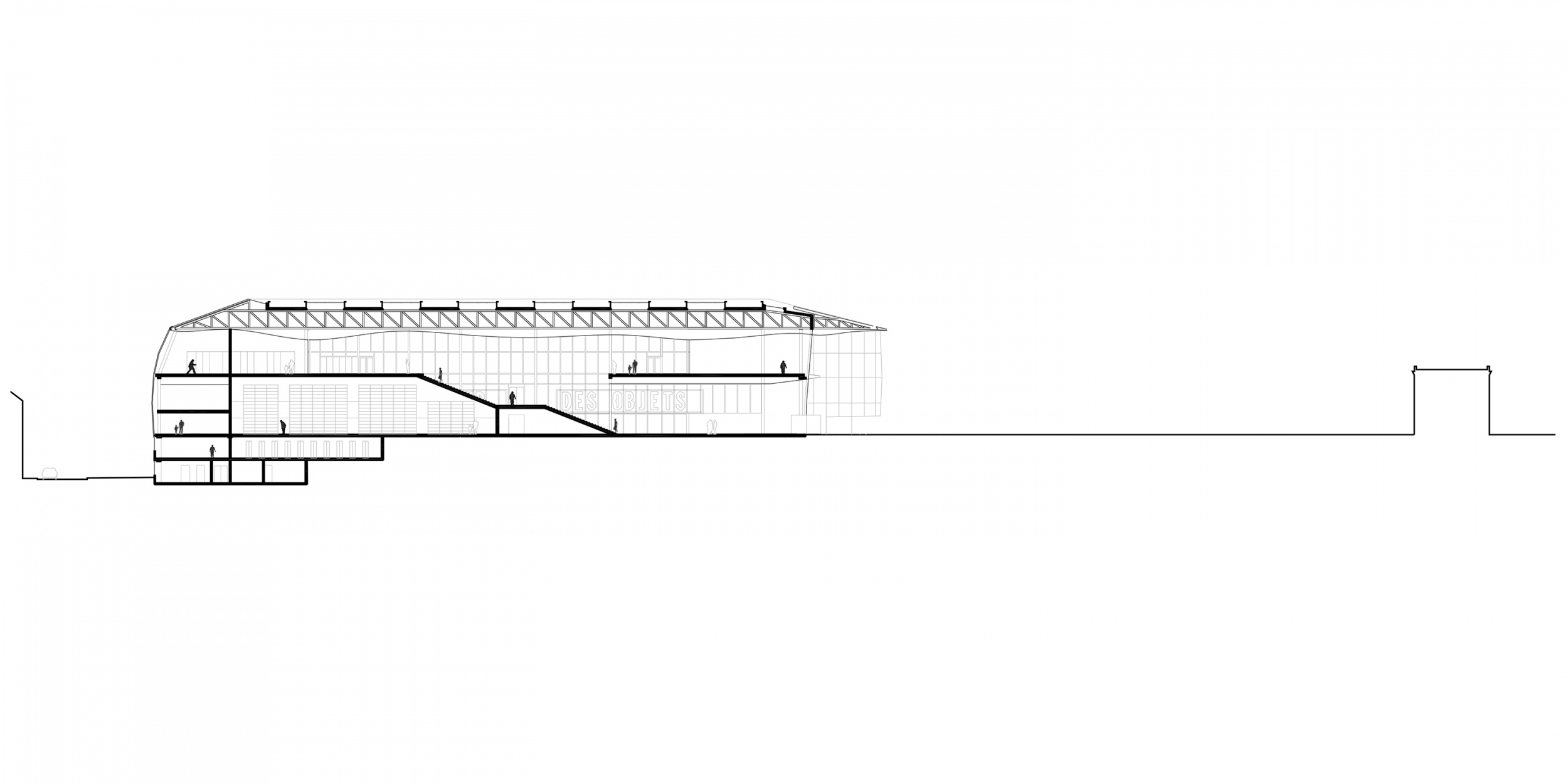 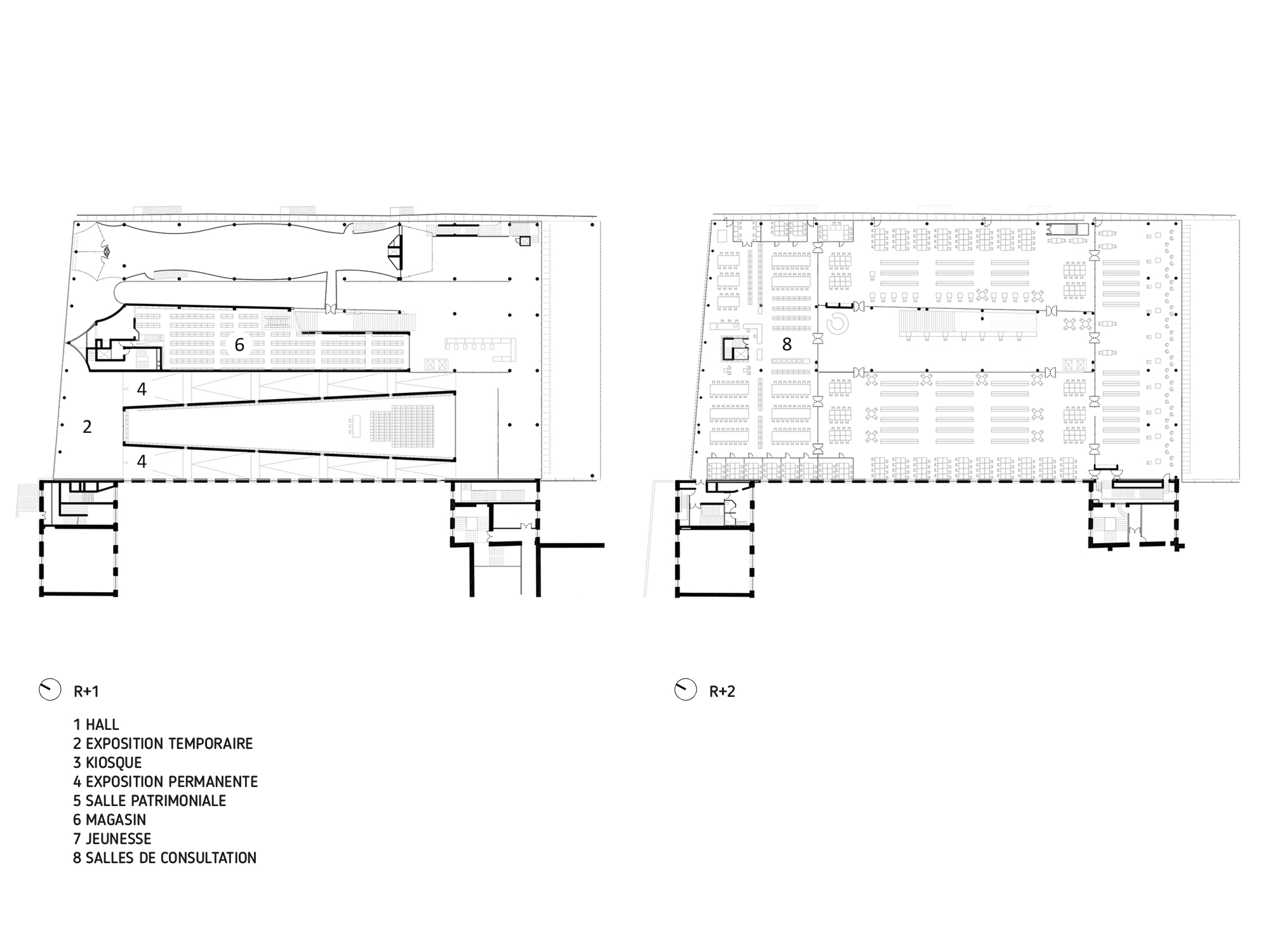 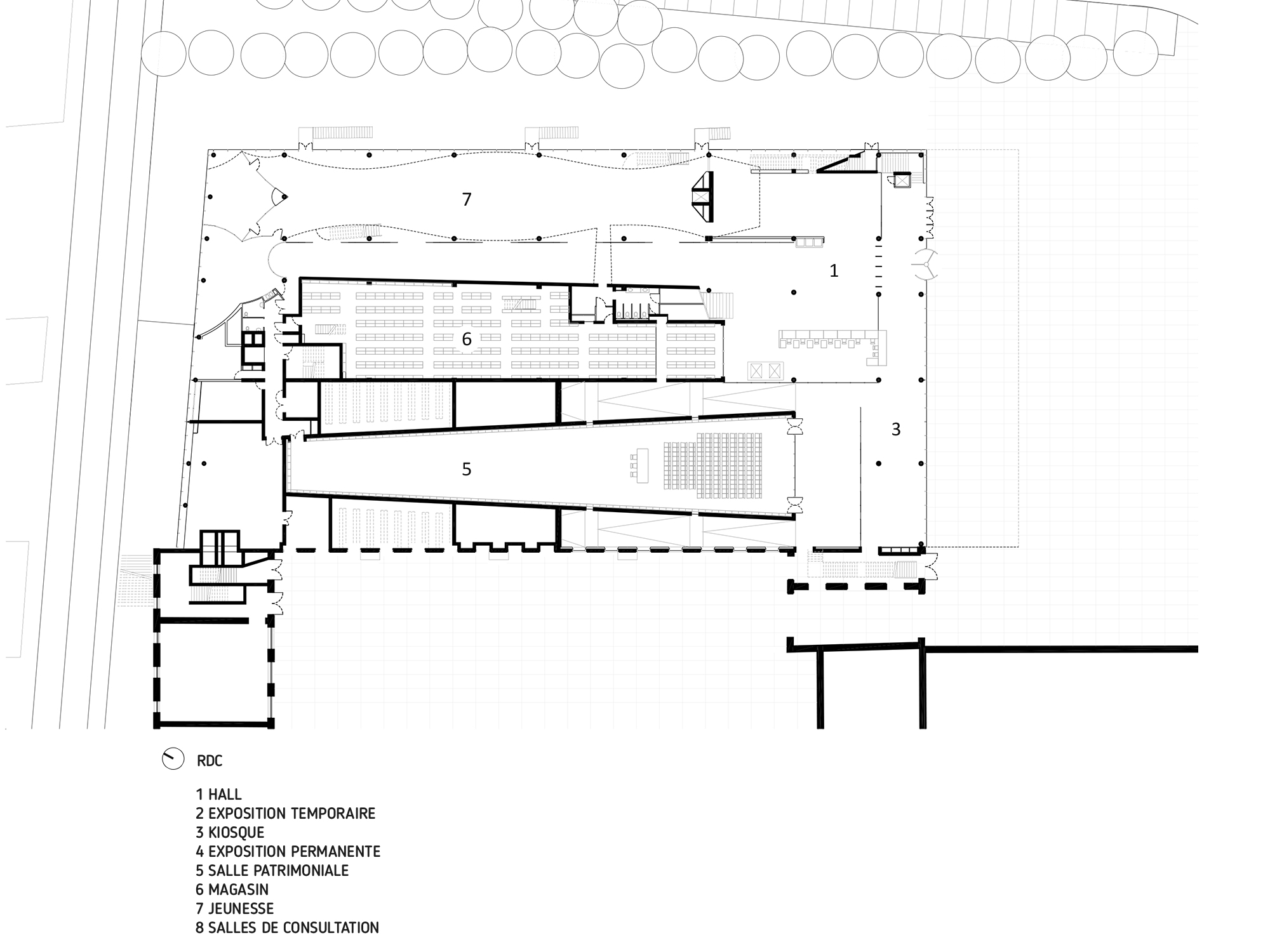 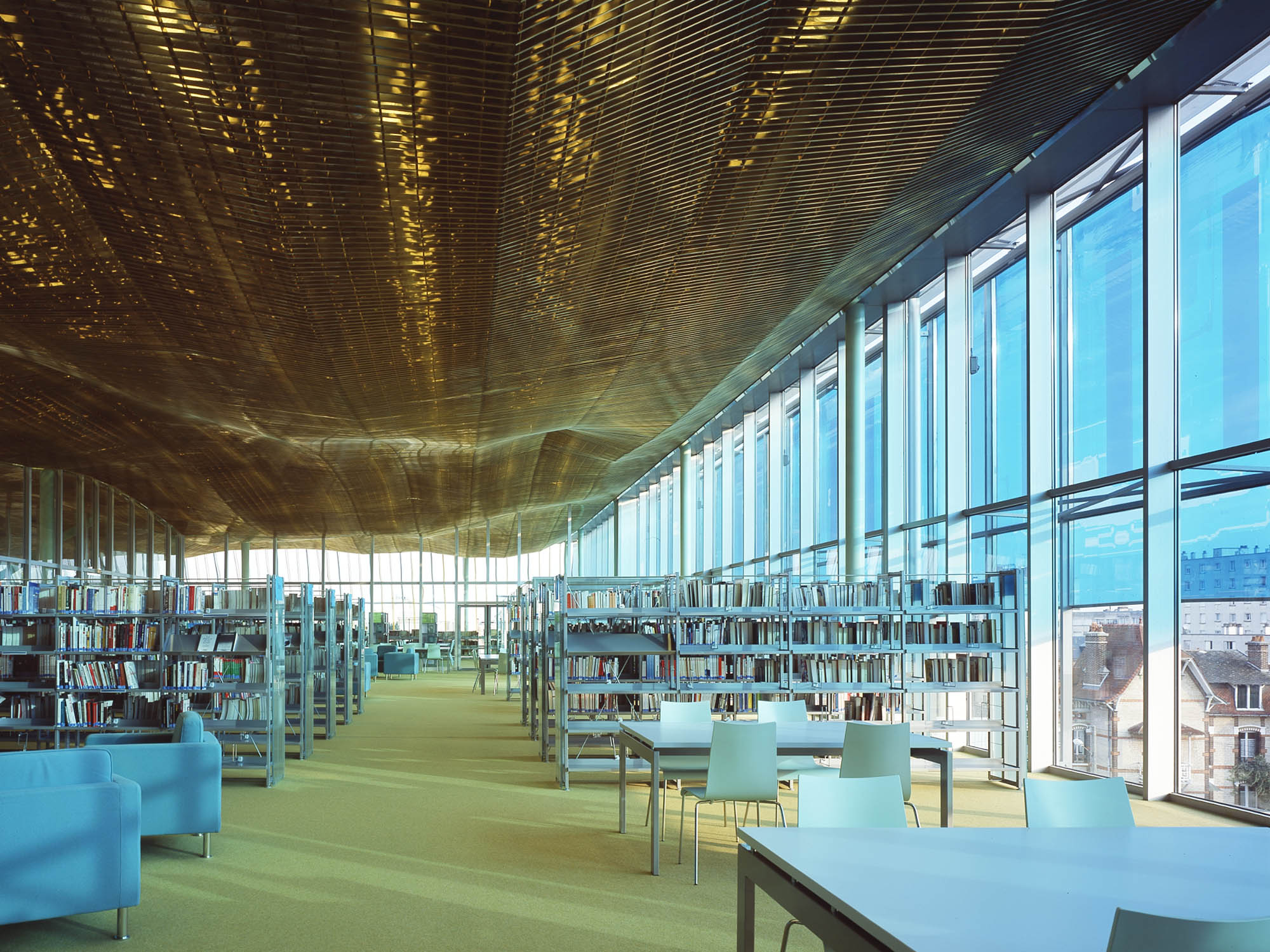 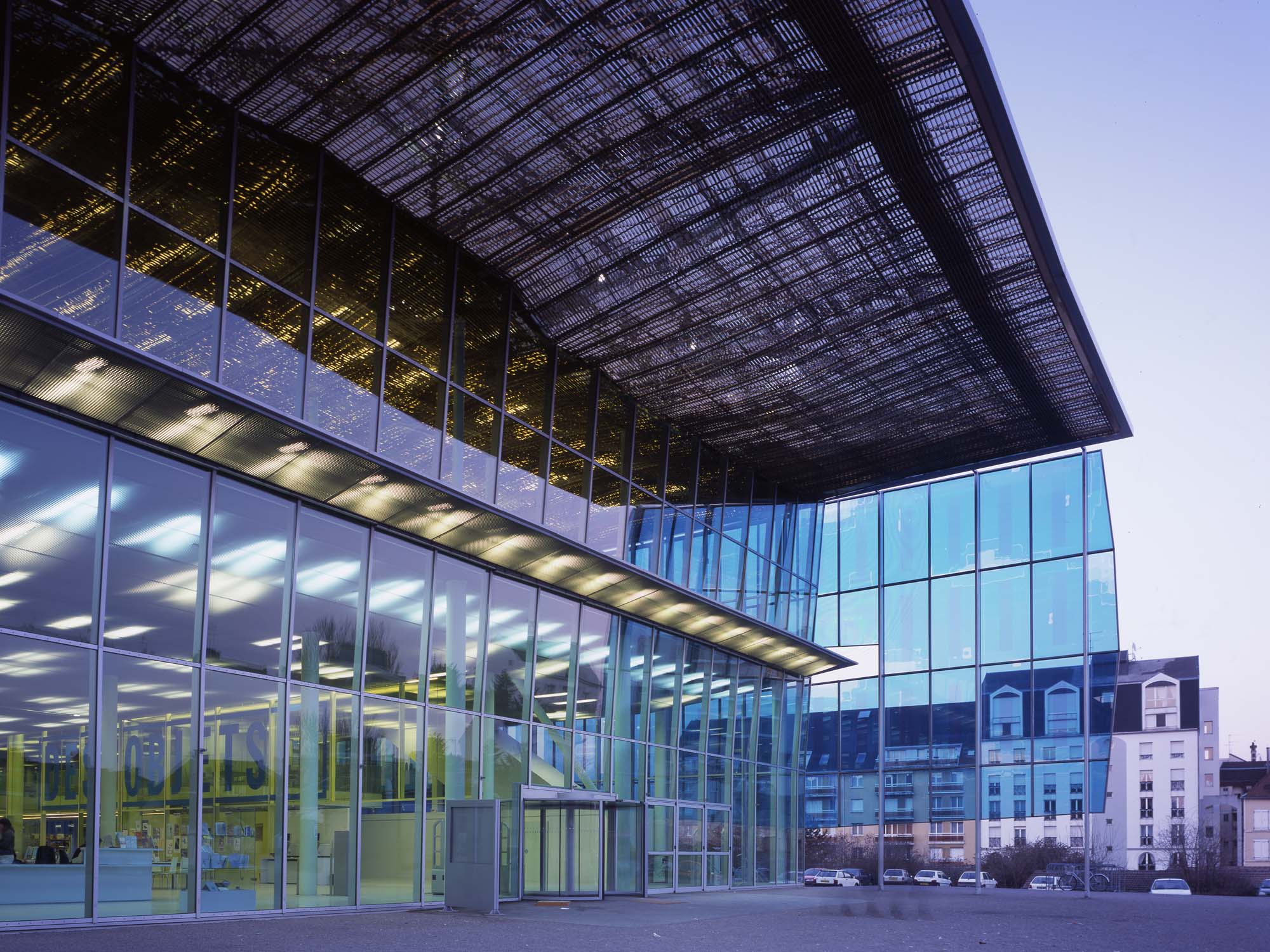 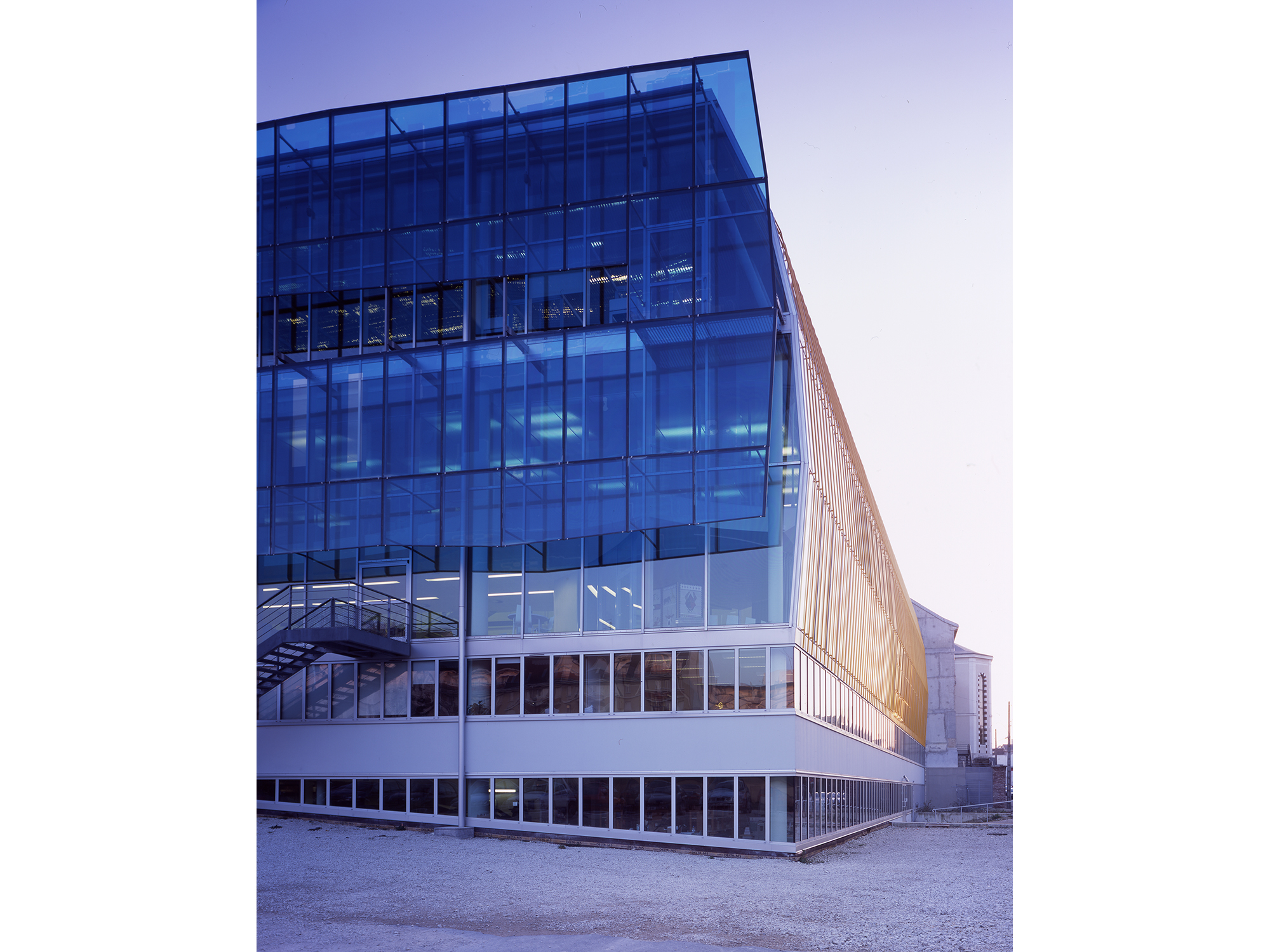 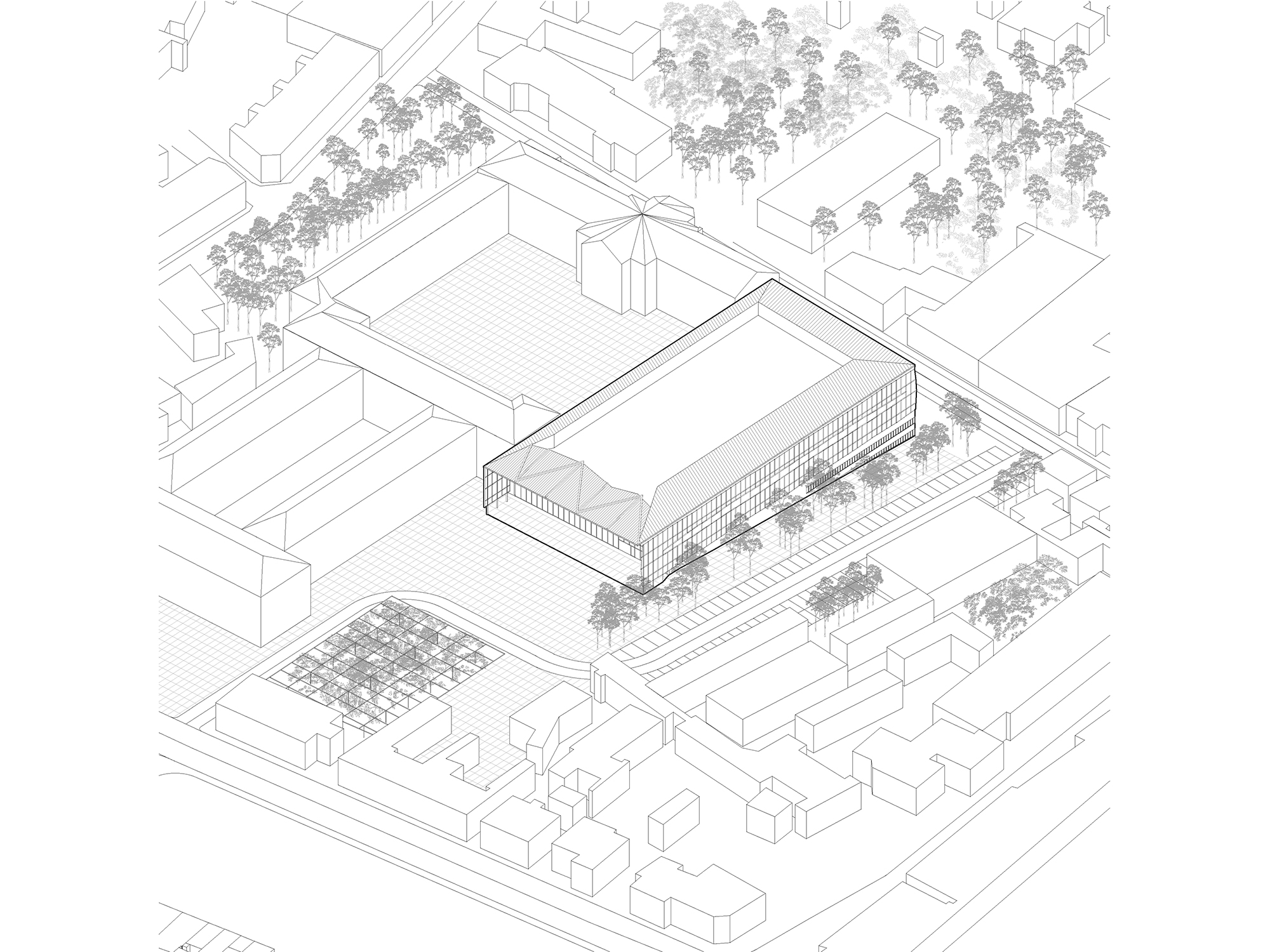 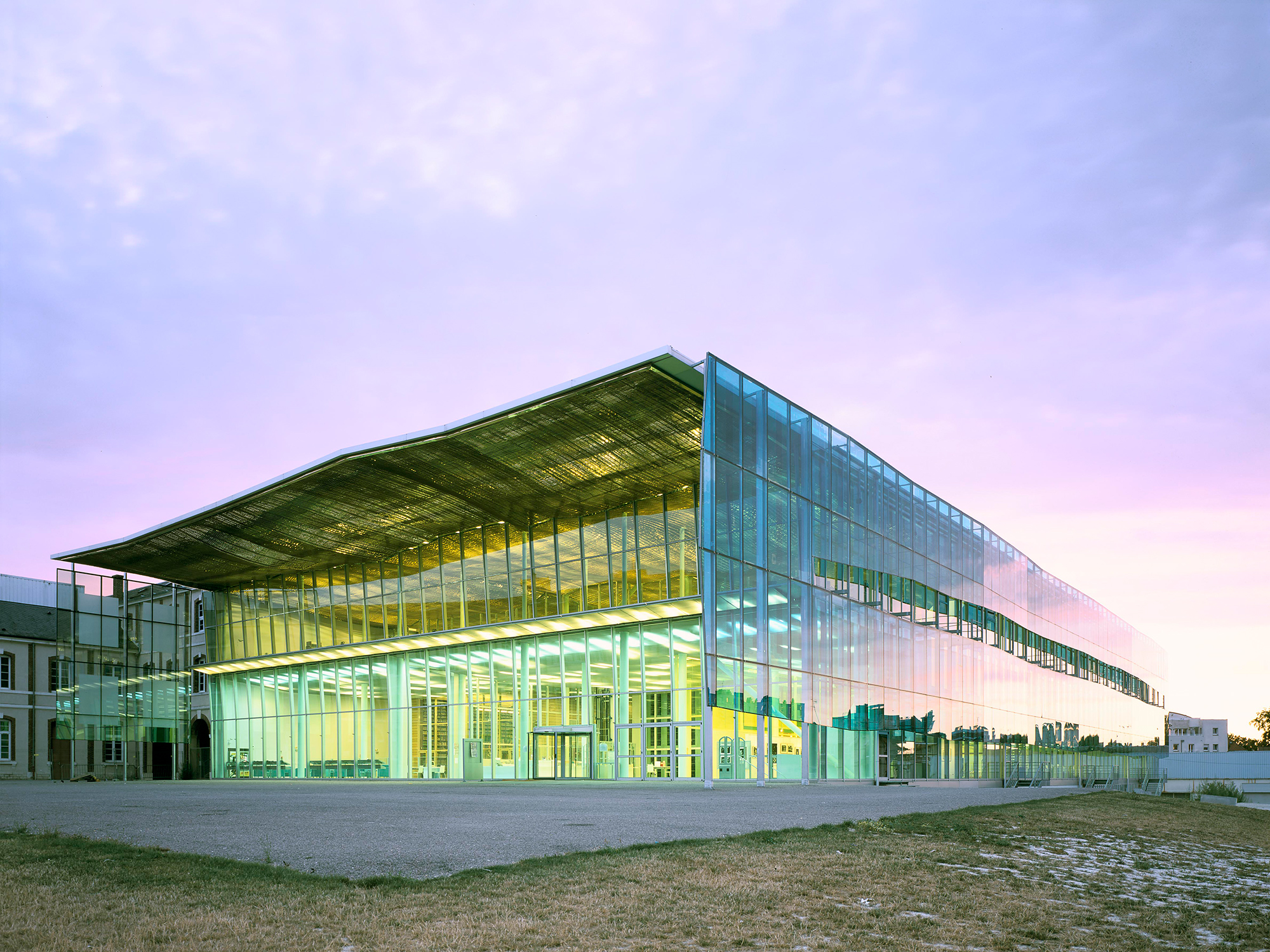 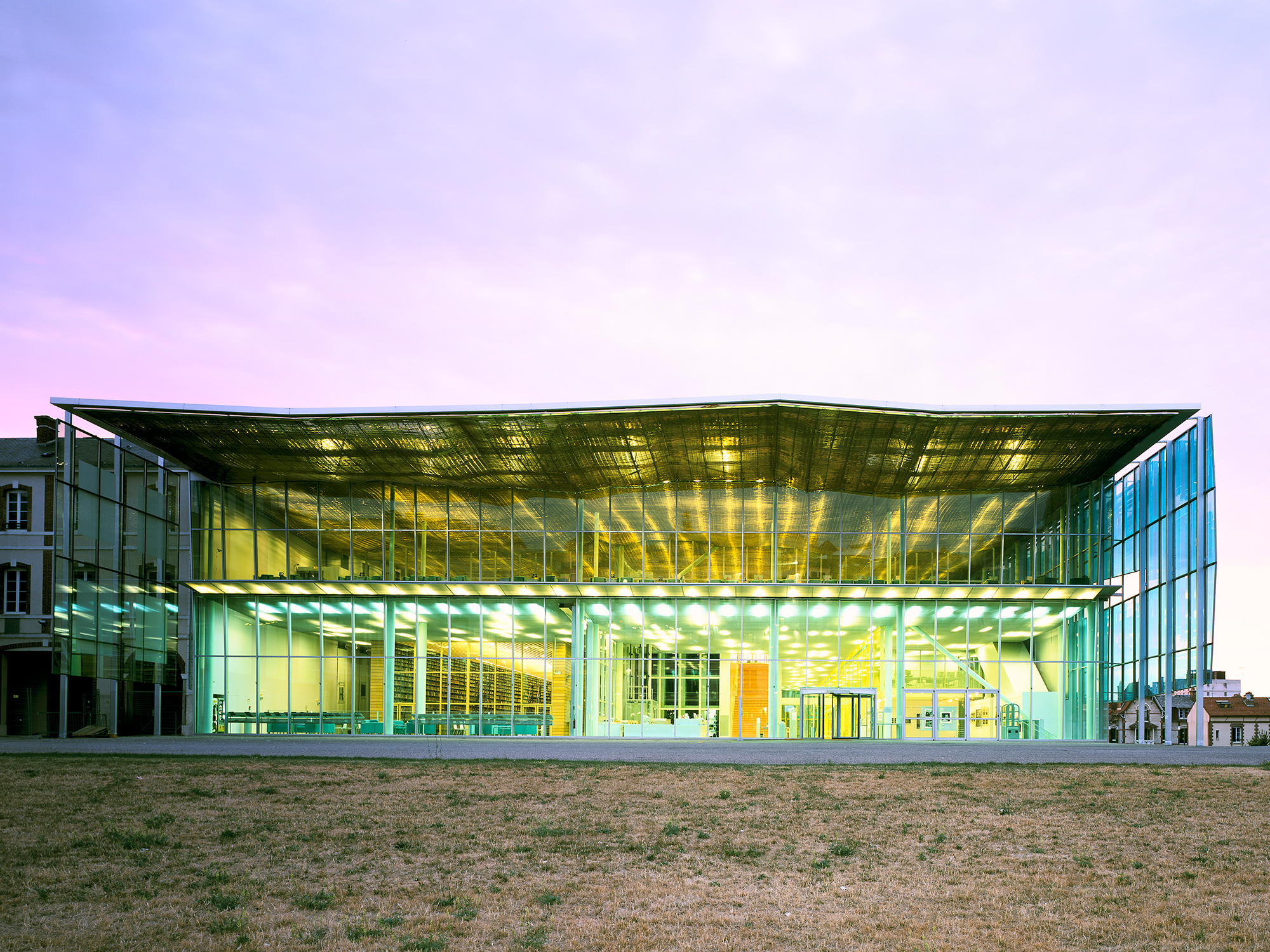 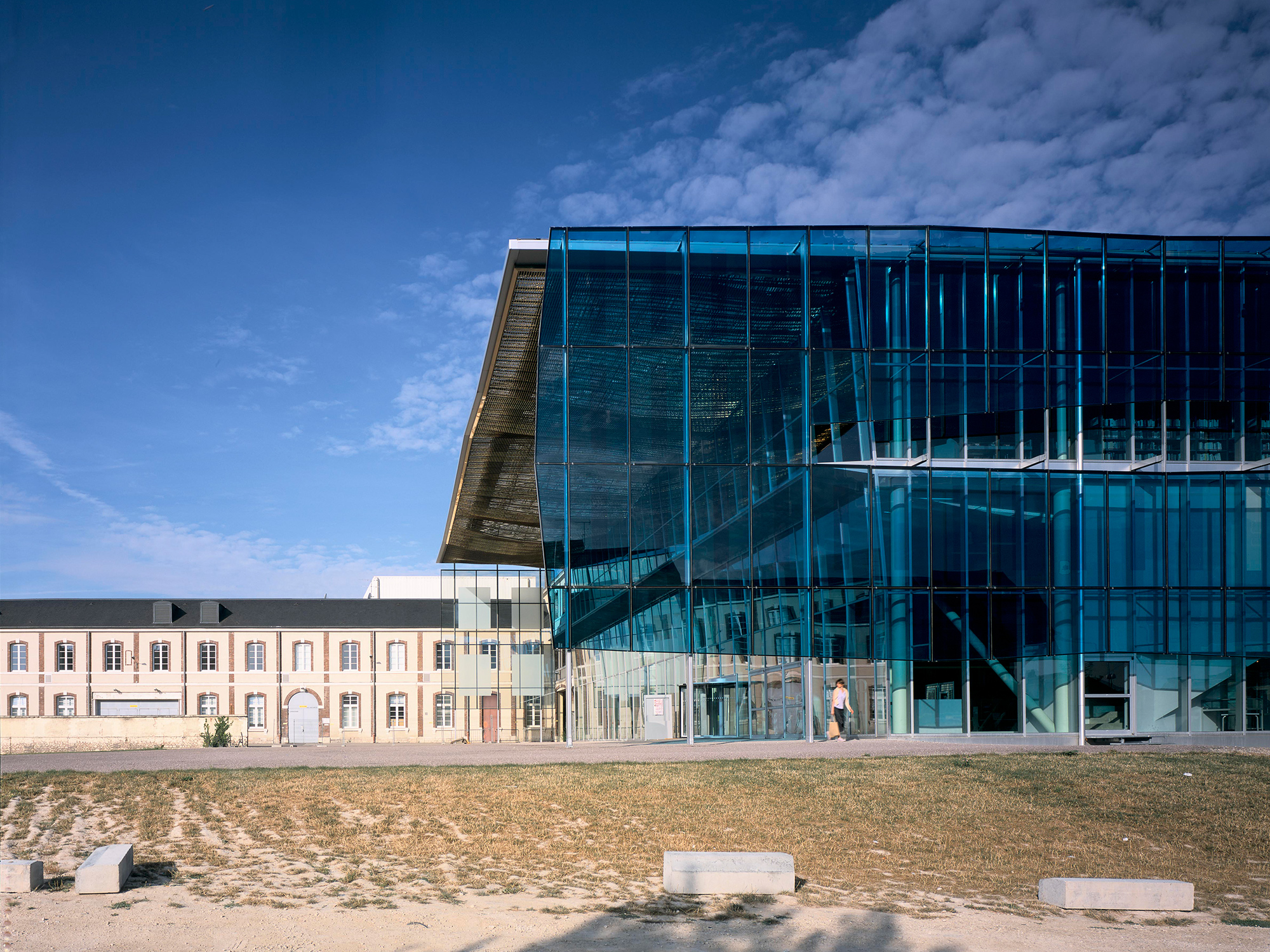 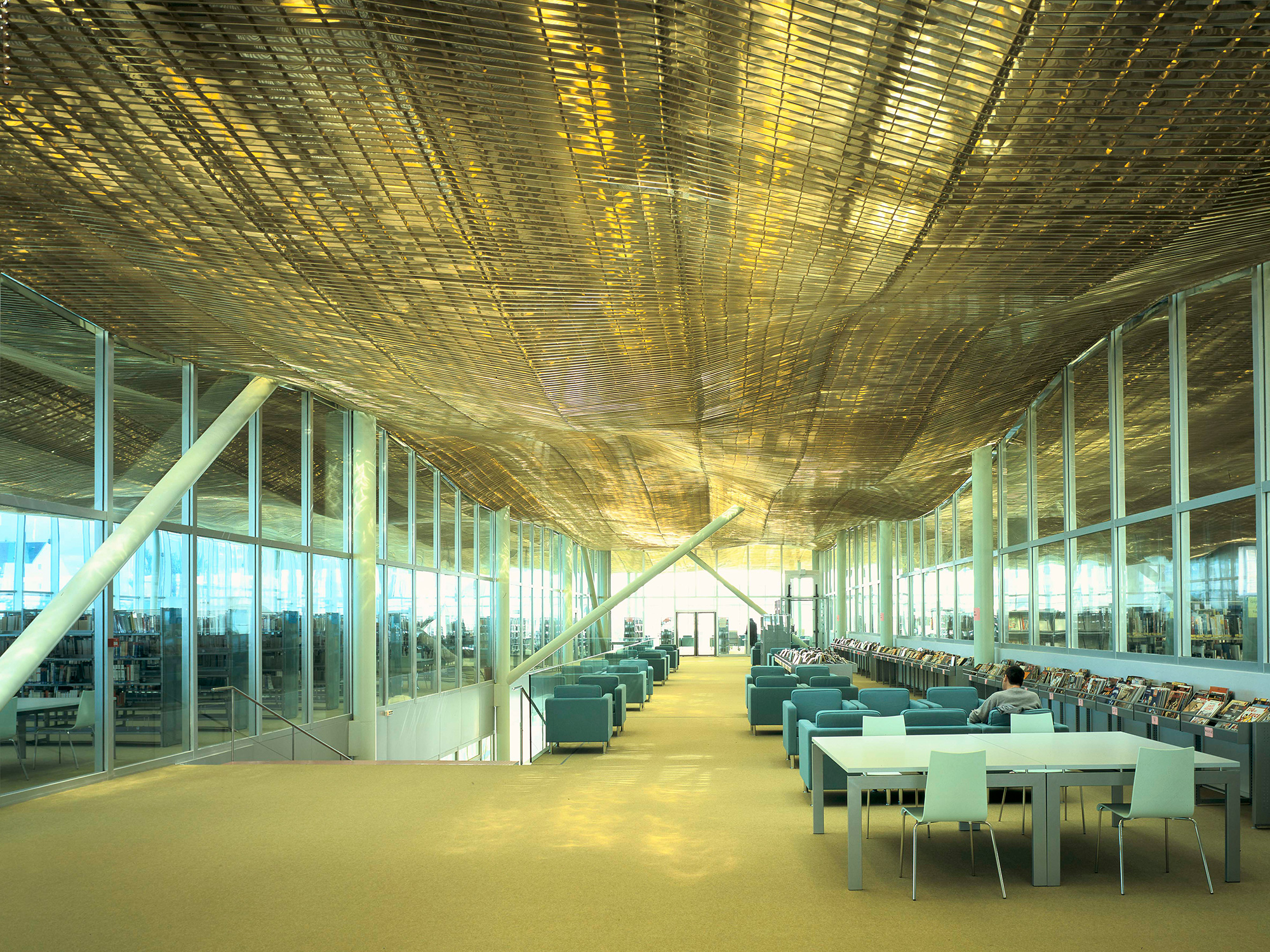 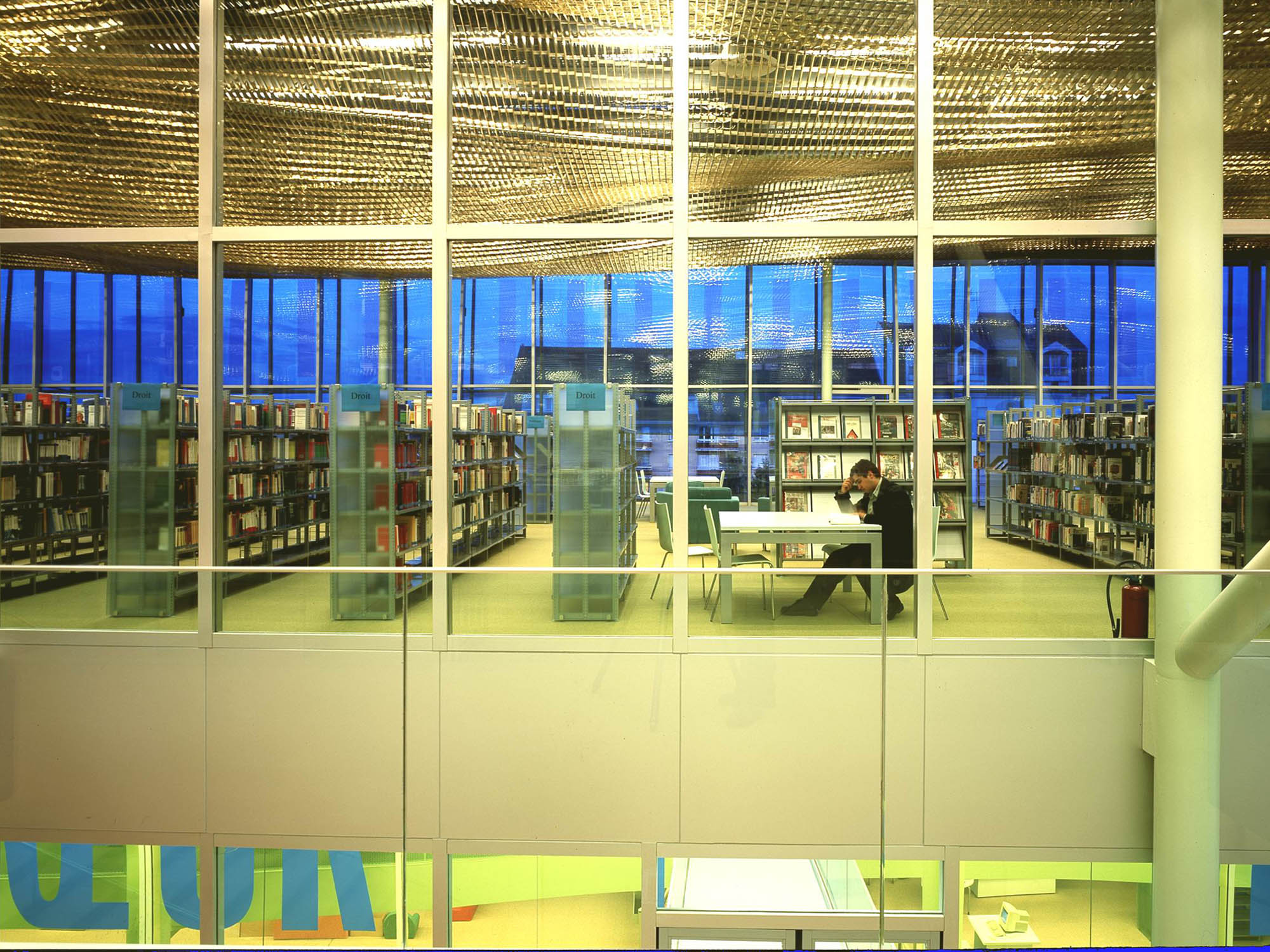 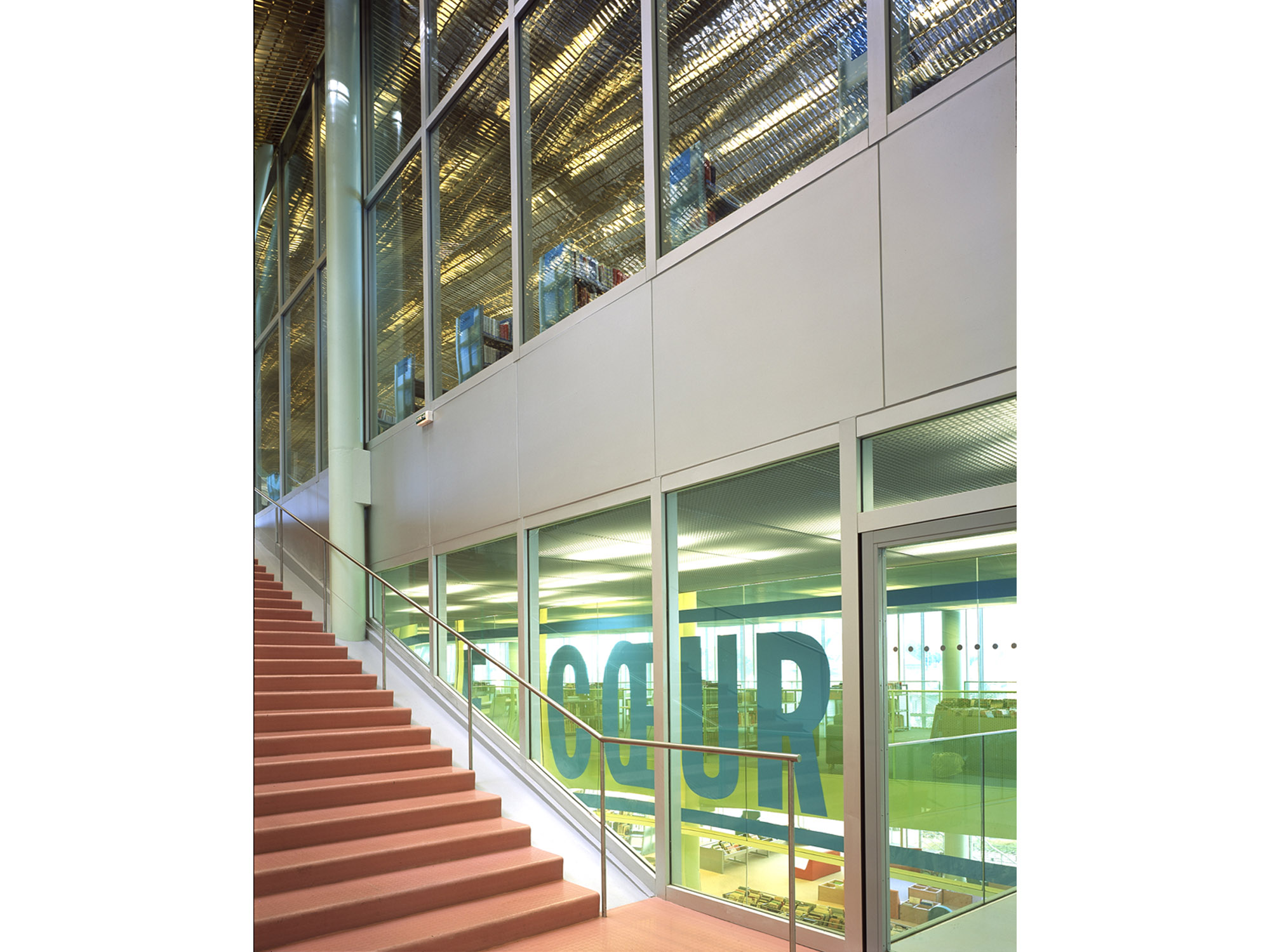 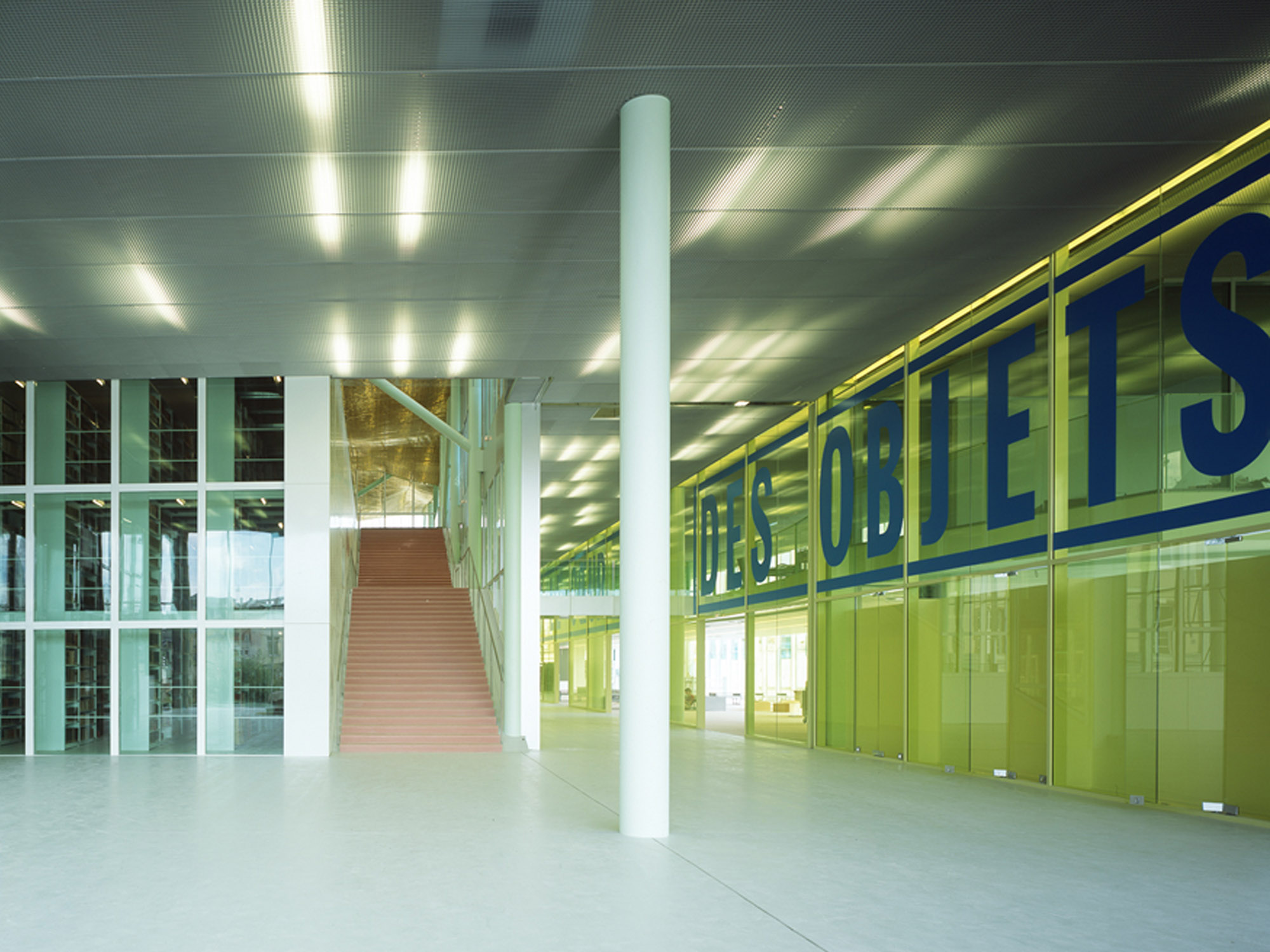 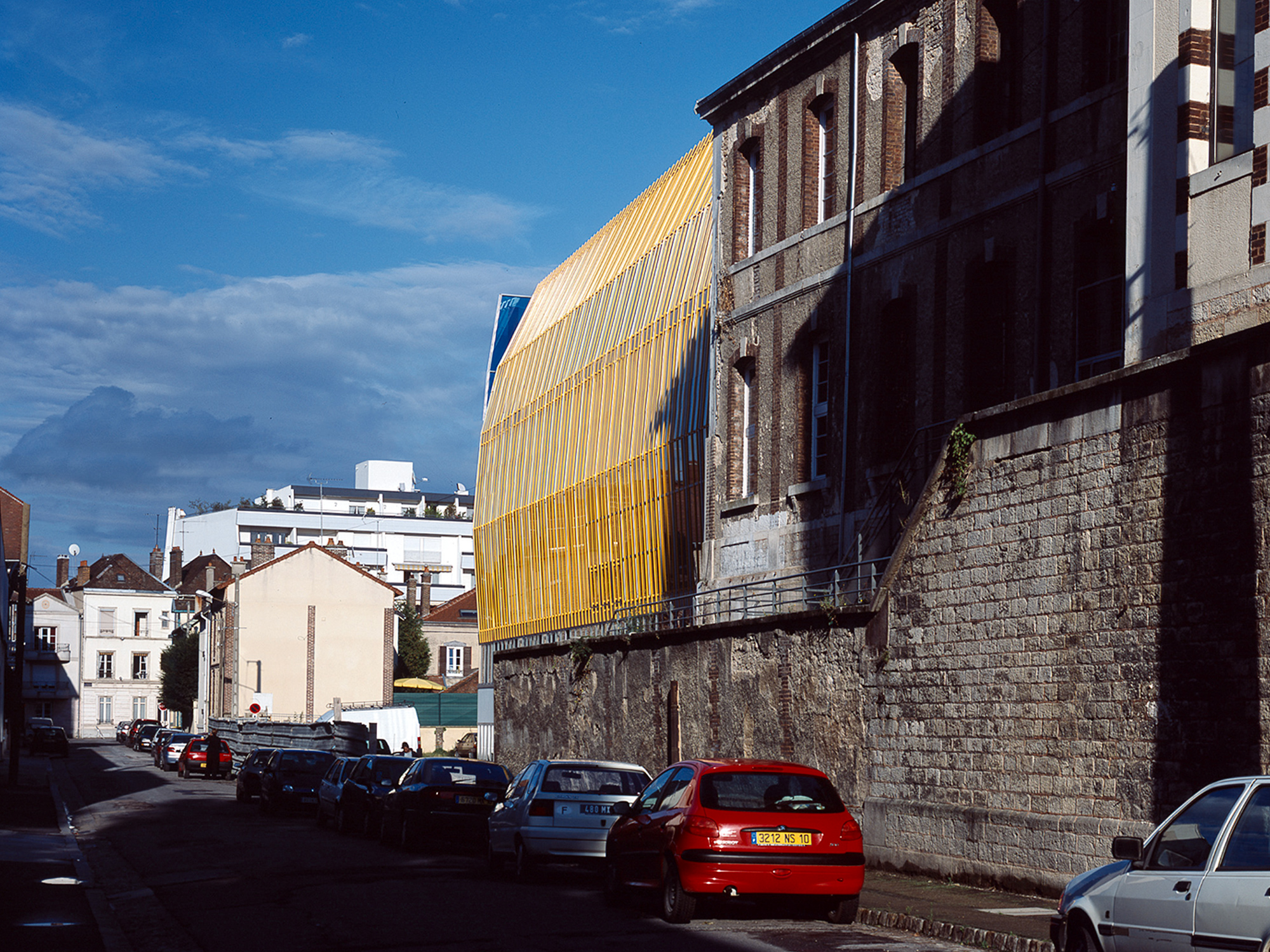 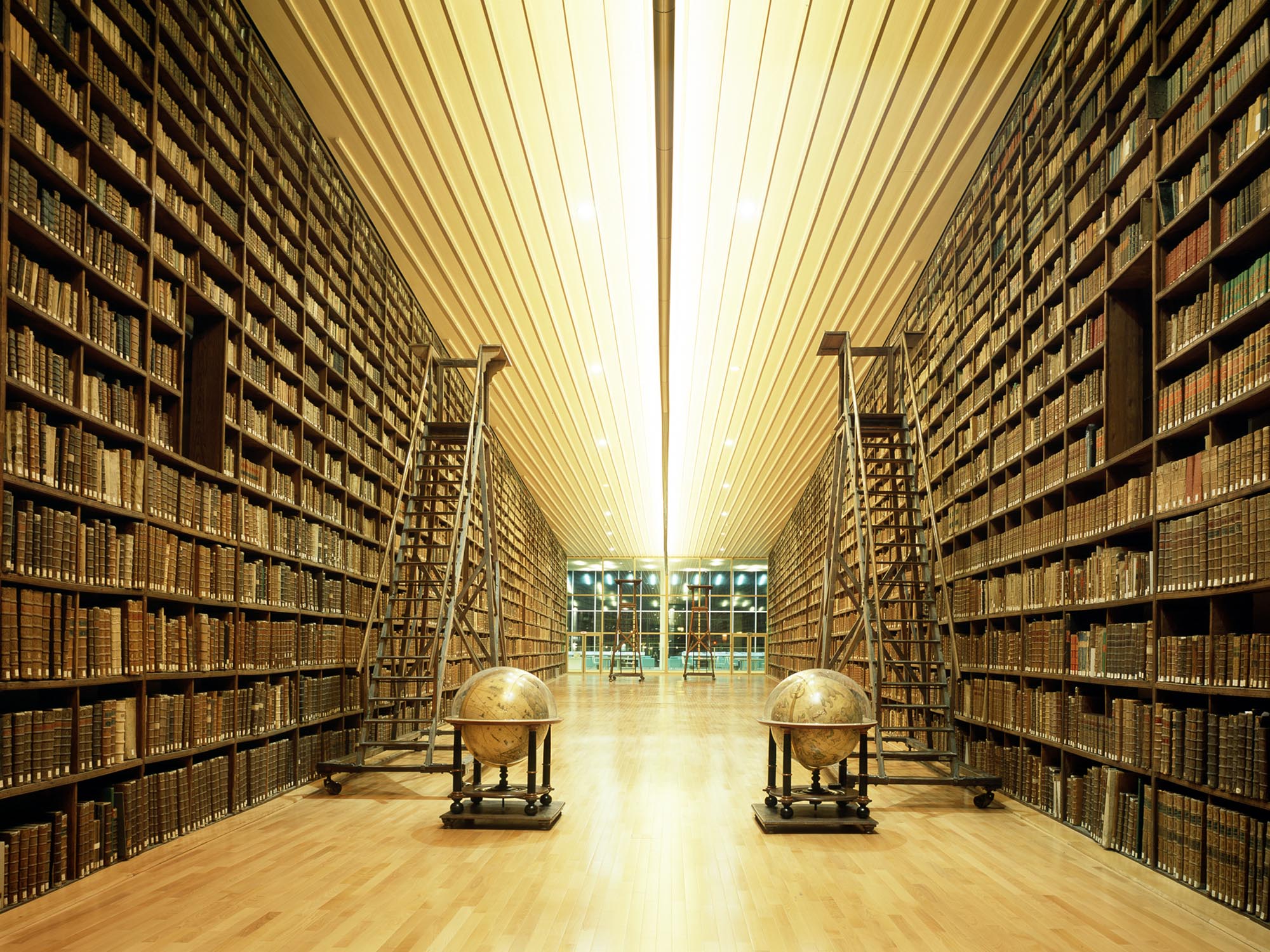 The multi-media library is the heir of a long tradition of collection and distribution of books that is specific to the city of Troyes, where the first public library was founded in the 17th. It preserves an exceptional medieval collection and keeps the personal Bible of Saint Bernard of Clairvaux. The program includes, apart from spaces dedicated to reading, a heritage hall containing books coming from the Abbaye of Clairvaux, as well as an exhibition space dedicated to the history of books in Troyes. The vast cultural wealth that belongs to the Troyes library is located at the heart of a large urban block, set back from the neighboring streets, behind the parking lot of a McDonald’s restaurant and amidst a built-up environment of poor quality. We designed a building that is intentionally deprived of facades as such. For any suggestion of a facade composition would refer to the built environment, would create a “vis-à-vis” and engage a conversation with neighboring buildings that express commonplaces. Therefore, there is no front, back or side façade to the building. There is nothing to assert the importance of its limits. The building’s geometry remains elusive and uncertain, especially as the distinctions are blurred between inside and outside, front and back, matter and color, text and construction. The Troyes library is more a phenomenon than a construction, and it gains in openness, in generosity and in responsiveness. The presence of the building is constituted by the juxtaposition of very large elements arranged in strips or continuous layers. These elements are the suspended ceiling in gold lattice, the gridded suspended ceiling over the ground floor, the blue facade, the heritage hall, the storage rooms, the pink stairway, the yellow corridor, the text, the mezzanine. The observer cannot take in all these devices with a single look and needs to walk around. Doing so, he will acquire impressions of accumulation and depth which serve as a metaphor of reading. All these elements escape the common scale of architecture, and the library thus regulates its own relation to the town : it is, in itself, an urban landscape. As such bigness might overwhelm, the materiality of the elements is dissolved in color. Their impact becomes relative to a general harmony, which is intangible. Finally, the remaining heaviness and possible architectural commonplace are balanced by a sentence written on a long glazed partition wall. This is a work by an American conceptual artist : Lawrence Weiner. It uses all the resources quoted above : large size, depth and color, and it challenges the first of the building’s prerogatives (its size) without overusing its own advantage (meaning). The phrase is both enigmatic and pertinent : “Ecrit dans le coeur des objets” (Written in the heart of objects). These words stand in counterpoint to the library’s architecture and in confirmation of its cultural ambition : the meaning of the work relates to the connection between writing and things.